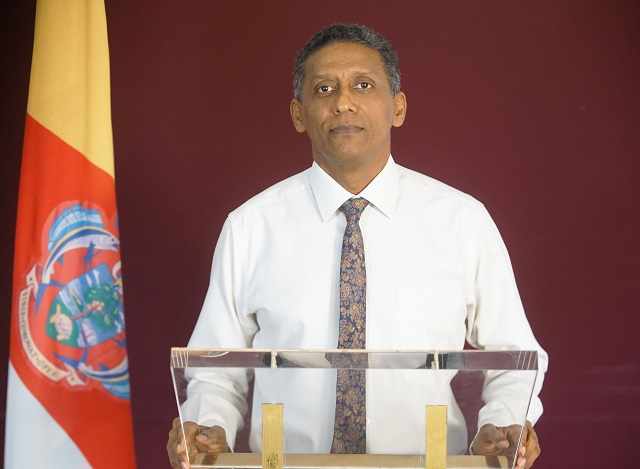 (Seychelles News Agency) - As Seychelles celebrated its Constitution Day on Thursday, President Danny Faure warned that the economic pain from COVID-19 could last a long time as he urged the island nation to fight through the pain as a united people.

Faure said in a national address that on June 18 in 1993, a great majority of Seychellois voted to adopt the Constitution, which is the supreme law of the country, through a referendum.

"This constitution that we are celebrating today has guided us well and allowed our young democracy to flourish. It has also served us well on a socioeconomic front," he said.

Faure said that in 2019, Seychelles, an archipelago in the western Indian Ocean, saw a foreign exchange surplus of $45 million, the highest ever. This was set to get even higher with the number of visitors set to rise and the economy in general expected to do even better in 2020 with a growth of 3.9 percent.

It was going to be an exceptional year for the country's economy, he said.

"But today on 18 June we see that yes, this moment we are in is exceptional. But not for the reasons we expected or hoped," said Faure.

Instead of a 3.9 percent growth, Seychelles will finish 2020 with a 10.8 percent decline and everyone will be severely hit. Already the value of salaries has decreased by 28 percent caused by the lack of foreign exchange brought in by the tourism industry, the President said.

"As we are starting to see, the consequences of this COVID-19 pandemic on our economy is extremely grave...It is impossible to make any predictions, either on the health front or economic front, with any certainty," he added.

Faure spoke on the measures he announced to protect the private sector and ensure that for at least three months people who lost jobs would be supported.

"For the 15 percent of businesses that did not receive assistance for one reason or another, I have decided that from 1 July, we will review the criteria to qualify for financial assistance. I have taken this decision following a series of consultations with the private sector," he said.

Faure said that over the next few months and years, the lives of the people in Seychelles will be extremely difficult.

"As long as there is no vaccine against COVID-19 and the global economy does not recover, our economy will struggle to recoup, and both of these factors remain extremely uncertain," he added.

Faure said that faced with this national emergency "we need to come together. It is for this reason that as a presidential candidate in the upcoming election, I will put in front of the Seychellois people the urgency of the next government being a government of national unity."

"This means an inclusive government that will better reflect our political, economic, professional and civic strengths and voices, so that we can successfully navigate this storm together as a nation. A government that puts partisan politics aside, where the only priority is to save Seychelles," he added.