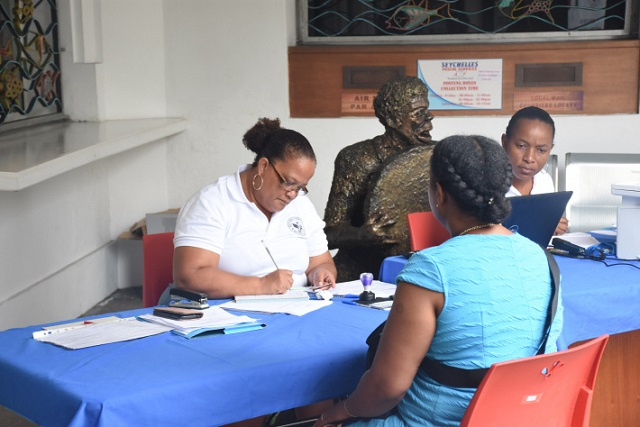 Voters verifying their status at one of the special voters’ registration centres set up in the capital Victoria in December 2019. (Thomas Meriton)

(Seychelles News Agency) - The two main political parties in Seychelles, United Seychelles (US) and Linyon Demokratik Seselwa (LDS), are urging first-time voters to register and cast ballots in the presidential election in October.

Provisional dates announced by the Electoral Commission for the presidential elections are October 22-24. Once the dates are confirmed the voters' register will close.

Figures released by the Electoral Commission show that 89,638 citizens are eligible to vote and 72,287 are registered to vote, meaning some 17,000 citizens were not registered as of May.

Seychellois citizens can check if they are on the register of voters by going in person to the Electoral Commission's office at Aarti Chambers in the central district of Mont Fleuri. Citizens can also go to the designated district centres, check via SMS by texting their National Identity Number (NIN) on 9600 or on the Electoral Commission's website at http://www.ecs.sc.

Roger Mancienne, leader of the opposition coalition, LDS, told SNA that there is a lot more that can be done to sensitise the public, especially the youths about the importance of registering as a voter.

He added that "LDS has pressed the Electoral Commission to extend registration facilities up to after work hours which they have done. They are now available in the regional centres until 6 pm."

Mancienne said that "young voters are an important bloc for the LDS. They are a large group. Many tend to be unconcerned about politics, feeling that it doesn't touch their lives. But mobilising them is important not just for the sake of one election but to get them to be participants in the democratic process."

United Seychelles, the ruling party, said it is more or less satisfied that the Electoral Commission is doing its best within the framework from which it is operating.

The party's chief executive, Andy Jean-Louis, pointed out that the facility to have first-time voters automatically included on the register existed before as did other mechanisms but this has been changed.

"Now it is the role of each party to take responsibility and play a more active role in encouraging the first-time voters to register instead of passing the responsibility to the Commission."

"We must all realise that we have enormous power to decide on who leads our country and what we want for our future. We must fulfil this responsibility because, in the end, we will be accountable for our collective decision. So, we support every move to get maximum people to take part in this democratic process," said Jean-Louis.

Other than first-time voters, there are others who are eligible to vote but who are not on the register. These include citizens who have served prison sentences and whose names were removed from the register and those who were in Seychelles when the population census was carried out, but who have since moved abroad.

It also includes Seychellois who were not in the country during the last elections and whose names were dropped from the register, but who are now back in Seychelles, an archipelago in the western Indian Ocean.