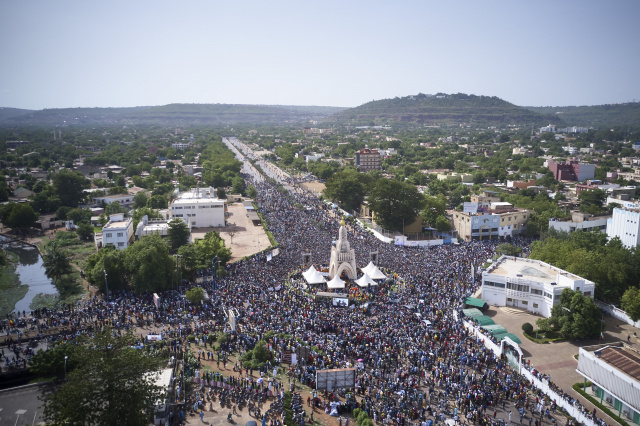 An aerial view shows protesters gathering for a demonstration in the Independence square in Bamako on June 19, 2020. Imam Mahmoud Dicko, one of the most influential personalities in Malian political landscape, called for a political march to be held after the Friday prayer, against Malian president Ibrahim Boubacar Keïta and his government. (MICHELE CATTANI / AFP)

(AFP) - Mali's beleaguered President Ibrahim Boubacar Keita's attempts to soften his iron-fisted image appear to be falling flat as a newly energised opposition intensifies calls for his resignation over continuing bloodshed in the poor Sahel country.

A newly formed opposition coalition of religious leaders, politicians and civil society figures has rallied tens of thousands to take to the streets of Bamako in two demonstrations this month.

Calling itself the "June 5" movement after the date of the first protest, the coalition is channelling deep-seated frustration over jihadist attacks and inter-ethnic violence that have claimed thousands of lives and forced hundreds of thousands to flee their homes since 2012.

The slow pace of political reforms, a flagging economy, a lack of funding for public services and schools and a widely shared perception of government corruption have also fed anti-Keita sentiment.

This month's protests followed demonstrations in May over the results of March's long-delayed parliamentary elections -- which Keita's party won -- as well as over coronavirus restrictions.

The 75-year-old head of state, who has been in power since 2013, has been able until now to shrug off the criticism of a divided opposition, mainly thanks to support from the international community which sees him as a bulwark against the jihadist threat.

The "strongman" image of the political veteran known as IBK, with his tough line on terrorism and corruption, has been an asset in the past.

But the coronavirus pandemic and the kidnapping of opposition leader Soumaila Cisse by jihadists nearly three months ago have made severe inroads on Keita's standing.

At the head of the June 5 movement is the charismatic Mahmoud Dicko, an imam and Islamic hardliner whose political star is rising in the West African country, described by political scientist Oumar Diakite as a "lifeline" for the opposition.

"IBK will emerge weakened from the crisis," said Diakite, adding that the president "must stay" but will be forced to modify his governing style.

It is a tall order for Keita, who is known for an uncompromising temperament and a preference for strong, centralised power.

But he seems to be trying on a conciliatory stance, mooting a national unity government in a June 14 address to the nation. "My door is open and my hand is always extended," Keita said.

Mediators from the regional organisation ECOWAS, whose efforts are supported by UN Secretary-General Antonio Guterres, had recommended such a move.

"In the current circumstances, no government can solve Mali's problems, not even a government of national unity -- which the June 5 movement has not requested and does not want," the coalition said on Saturday, reiterating their demand for the resignation of Keita and his government.

An ally, Cheick Oumar Gadjigo, said he favoured a unity government, but with Keita at the helm. "IBK has managed crises and I am sure he will find solutions," he said.

A diplomat from a neighbouring country said, for his part: "My feeling is that there are backroom manoeuvres between hawks and doves around the president. I have no doubt he wants dialogue. But part of his entourage wants none of it."

The son of a civil servant, Keita was born in the southern industrial city of Koutiala, the declining heartland of cotton production.

He studied in the former colonial power France and spent more than two decades there before returning to Mali in 1986.

He experienced his own landslide defeat in 2007 to Amadou Toumani Toure, before winning the 2013 election after campaigning as a unifying figure in his fractured country, belying his tough-talking reputation. Keita was re-elected in 2018, defeating Cisse.