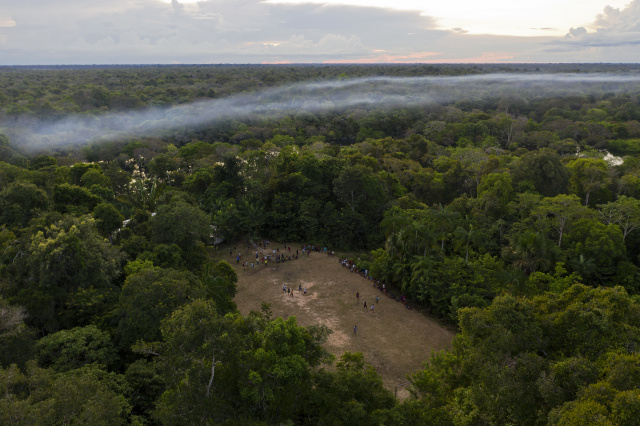 (FILES) This file aerial picture taken on March 15, 2020 shows a football game taking place in a forest clearing in the Bauana community, municipality of Carauari, in the heart of the Brazilian Amazon Forest. Vast tracts of pristine rainforest on three continents went up in smoke last year, with an area roughly the size of Switzerland cut down or burned to make way for cattle and commercial crops, the Global Forest Watch said in its annual report on June 2, 2020, based on satellite data. Brazil accounted for more than a third of the loss, with the Democratic Republic of Congo and Indonesia a distant second and third. (Florence GOISNARD / AFP)

(AFP) - Investment funds managing close to $4 trillion in assets called on Brazil Tuesday to halt deforestation of the Amazon in an open letter warning that biodiversity loss and carbon emissions pose a "systemic risk" to their portfolios.

The managers from countries across Europe, Asia and South America expressed their fears that the government in Brasilia was using the COVID-19 crisis to push through environmental deregulation that could "jeopardise the survival of the Amazon".

"We are concerned about the financial impact that deforestation and the violation of the rights of indigenous peoples may have on our clients and investee companies, by potentially increasing reputational, operational and regulatory risks," the letter said.

While lockdowns linked to the coronavirus pandemic are likely to see the world's carbon emissions fall several percentage points, increased deforestation in the Amazon could actually increase Brazil's annual contribution to global warming.

Environmentalists warn 2020 is on track to be the most destructive year ever for the world's biggest rainforest, with even more losses than in devastating fires that triggered a global outcry last year.

A total of 829 square kilometres (320 square miles) in the Brazilian Amazon, 14 times the area of Manhattan, was lost to deforestation in May alone, according to satellite data from Brazil's National Space Research Institute (INPE).

That was a 12-percent increase from last year, and the worst May since record keeping began in August 2015.

The fund managers, who collectively control more than $3.75 trillion worth of assets, urged Bolsonaro's administration to show a "clear commitment" to reducing deforestation and to protect indigenous rights.

"The Amazon is one of (the) primary areas of rainforest which impacts the global climate and we joined the letter to call for urgent action from the government to avoid taking actions that have a negative impact on climate change," he told AFP.

Corey Klemmer, director of engagement at letter signatory Domini Impact Investment, said that his firm was "acutely concerned" about deforestation.

"Pushing the Amazon past a tipping point would have ripple effects that are difficult to estimate," he told AFP.

These effects could be as geographically distant as affecting crops in the US Mid-west due to decreased rainfall as well as stemming the flow of new pharmaceuticals derived from Amazonian plants, Klemmer added.

Most of the signatories are members of the Investor Initiative for Sustainable Forests, which engages firms that are exposed to deforestation by their investments in soy and cattle production.

"As financial institutions, we see deforestation and the associated impacts on biodiversity and climate change as systemic risks to our portfolios," they wrote.

General » Be a reporter: Write and send your article » Subscribe for news alert
Tags: Brazil, climate