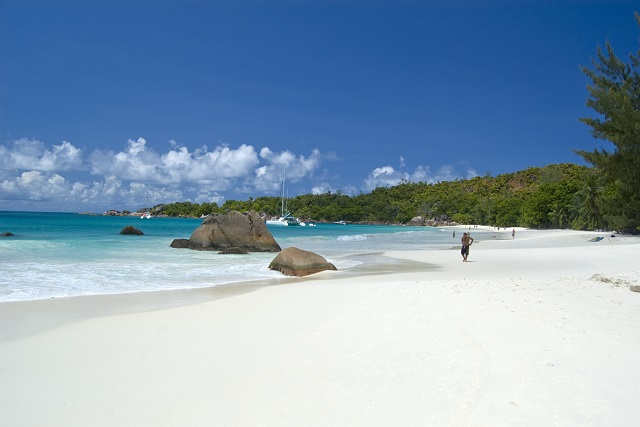 The minister said that the beach of Seychelles is of paramount importance as "it is the most unique selling point" of the island nation. (Gerard Larose, Seychelles Tourism Board)

(Seychelles News Agency) - Seychelles' Beach Control Committee will need to take measures to ensure that social distancing and good hygiene practices are being followed on the island nation's beaches as the country re-welcomes tourists in August, said the tourism minister.

The Minister for Tourism, Didier Dogley, told the press on Tuesday, that there is a need to start this discussion now as "there aren't many foreign visitors in the country, or going to the beach."

"We have seen in other countries, where tourists are already flying in, that there are various measures being taken, and we will need to do the same. We will need to make sure that social distancing and hygiene are practised accordingly," he said.

The Beach Control Committee was set up in February this year and was tasked with the sustainable management of all beaches so Seychelles can maintain its image with tourists as a world-class beach destination.

The minister explained that despite the fact that the committee was set up before COVID-19 became a global issue, Seychelles had to focus its attention on other priority areas when the virus became a pandemic and hence placed aside the work that the committee had planned.

"We had to focus on other things other than the major issues that we face with managing and controlling some activities that are detrimental to the tourism industry and also the use of the beach in general. We would like to continue, as in various meetings that I have been in on the three main islands, people have been asking us to continue working on some of the issues that were affecting the tourism industry before COVID-19," said Dogley.

He added that it was outlined during these meetings that there is a need to "ensure that by the time the tourism industry restarts at least we will have measures in place and will be ready to have a better tourism industry in the country."

The minister said that the beach of Seychelles, an archipelago in the western Indian Ocean, is of paramount importance as "it is the most unique selling point" of the island nation.

"We always sell this pristine and unique kind of natural environment that is still very much intact. We have seen that during the past couple of years that there has been a proliferation of activities on the beach itself - people selling all sorts of things, putting up beach beds, playing loud music and partying until late into the night, and disturbing others, some carry out illegal activities, and there are crimes that happen," said Dogley.

The committee includes the Seychelles Police, department of environment, Enterprise Seychelles Agency,  Seychelles Hospitality and Tourism Association and the Seychelles Planning Authority. Dogley explained these different institutions have been brought together as each of them has a responsible role to play in the areas of concerns.

"We basically want to get everybody to take their role seriously and address those issues that are impacting on the enjoyment of the beach by those who are paying a lot of money to come here," said Dogley.

He added that other than there activities that negatively impact the images of beaches in Seychelles, in certain circumstances, there is a lack of facilities that people can use such as toilets, showers, and lockers.

In view of the country's economic downturn, the government will not be able to finance the construction of these facilities this year.