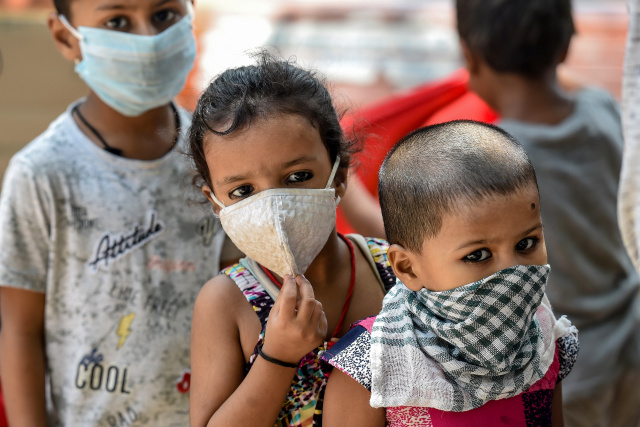 Slum children wait to receive chocolate cookies and soap from Non-Governmental Organisation (NGO) volunteers after the goverment eased a nationwide lockdown as a preventive measure against the COVID-19 coronavirus, in New Delhi on May 30, 2020. (Prakash SINGH / AFP)

(AFP) - More than 100 million children in South Asia could slip into poverty as a result of the coronavirus pandemic, a UN report said Tuesday of the long-term impact of the crisis.

Cases across the densely populated region -- home to almost a quarter of the world's population -- have risen in recent weeks even as the region lifts its lockdown to revive economies badly shattered by the virus.

"While they may be less susceptible to the virus itself, children are being profoundly affected by the fallout, including the economic and social consequences of the lockdown," the report by the UN children's agency UNICEF said.

South Asia -- which includes India, Pakistan, Afghanistan, Nepal, Bangladesh, Sri Lanka, the Maldives and Bhutan -- is home to some 600 million children, with around 240 million already living in poverty, the agency said.

In a worst-case scenario, the virus could push another 120 million into poverty and food insecurity within six months, it warned.

"Without urgent action now, COVID-19 could destroy the hopes and futures of an entire generation," UNICEF's South Asia regional director Jean Gough said in a statement.

Progress in healthcare -- such as immunisation, nutrition and other services -- were being "severely disrupted".

In Bangladesh, UNICEF said it found that some of the poorest families could not afford three meals a day, while in Sri Lanka its survey showed that 30 percent of families had cut their food intake.

With schools shut, poorer children have struggled to keep up with their education, particularly those in rural households without internet access -- or even electricity.

"There are concerns that some disadvantaged students may join the nearly 32 million children who were already out of school before COVID-19 struck," the report added.

Other major concerns include the risks of domestic violence, depression and other mental health issues with youths spending more time at home.

General » Be a reporter: Write and send your article » Subscribe for news alert
Tags: virus, health