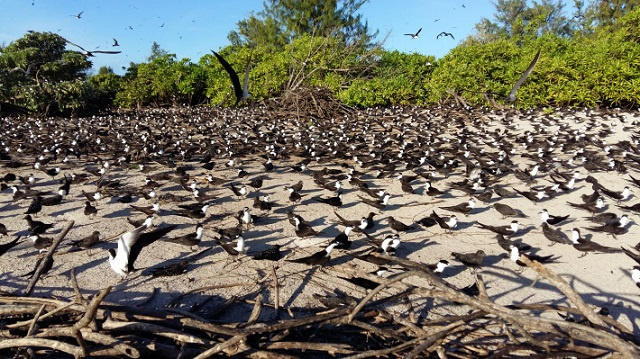 The project hopes to add to the over 30 years of research done on the species in the Bird Island colony. (Seychelles Nation)

(Seychelles News Agency) - Juvenile sooty terns have been recorded flying from the eastern coast of Africa to off the coasts of Myanmar and Thailand in the search for food, data collected from an ongoing study shows.

In September last year, 14 fledgeling sooty terns from the Bird Island colony were tagged with satellite tracking tags and monitored to better understand the species.

The project is being led by Rachel Bristol in collaboration with Bird Island Eco-Lodge Seychelles, Chris Feare and Christine Larose. Through the projects, the individuals are tracking the feeding habitats of juvenile sooty terns to better understand the open ocean environments surrounding Seychelles.

The project hopes to add to the over 30 years of research done on the species in the Bird Island colony to determine the connection between the populations of the seabirds and the health of open ocean ecosystems.

The Seychelles Conservation and Climate Adaptation Trust (SeyCCAT) said in a press release that "if sooty terns are abundant, then their prey species of small fish and squid are likely equally numerous pointing to a healthy open ocean ecosystem. Scientists hope to utilise these findings to better inform sustainability efforts such as the marine spatial plan and strengthen international collaboration for ocean conservation."

Sooty tern is a migratory seabird of tropical oceans which sleeps during flight,  returning to land only for breeding - on islands throughout the equatorial zone. This large, black-backed tern is found throughout the world's tropical seas and is the most abundant seabird in Seychelles, an archipelago in the western Indian Ocean.

In Seychelles, sooty terns are more widely known for their eggs, which are available for sale during certain months of the year. Commonly known as 'dizef zwazo' in the native Creole language, the speckled egg has a bright orange yolk, compared to other eggs with yolks which are usually yellow in colour. It is a delicacy that can be cooked as an omelette, hard-boiled and eaten with a pinch of salt or prepared as a salad.

Data collected from the satellite tracking devices attached to the fledgeling showed for the first time the incredible distances that juvenile sooty terns fly in search of food.

From the eastern coast of Africa to the seas off the coasts of Myanmar and Thailand, the feeding grounds for Sooty Terns helps illustrate the interconnectedness of the marine environment.