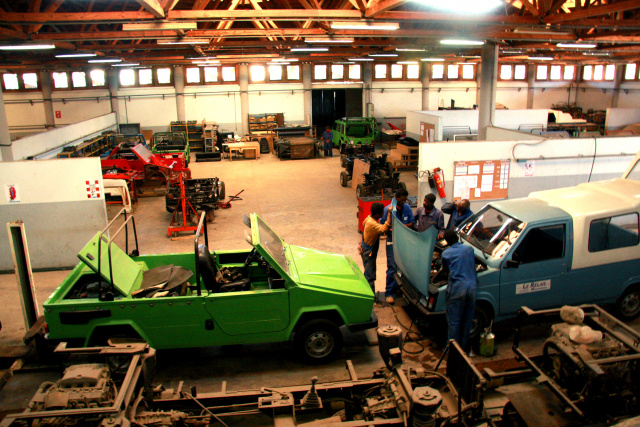 Employees work on a Faoka model of a Karenjy vehicle in an auto plant in Fianarantsoa, Madagascar on August 24, 2010. As part of an initiative aimed at boosting economic vitality in Madagascar, automobile manufacturer, Zebu, restarted production after 20 years. The brand, once a source of national pride, was launched by former president Didier Ratsiraka in 1987, but met its demise with that of the political regime in 1992. The expected yearly production of vehicles by the end of the year should be 10. (AFP PHOTO/GREGOIRE POURTIER)

(AFP) - Madagascar President Andry Rajoelina on Wednesday unveiled prototypes of a new brand of locally-made cars and motorbikes which are expected to hit the roads in three years.

GasyCar is the second brand of automobiles manufactured in the Indian Ocean island nation after Karenjy, which was launched by the government in 1984.

"We will sell in the national market, but we are also thinking of exporting to Africa and around the world," Rajoelina said.

A GasyCar plant is to be built this year and the first models are expected to reach the market by 2023.

Prototypes of GasyCar motorbikes and SUV models were shown at the launch.

Another popemobile was built for Pope Francis in 2019.

The hand-made vehicles are rustic and lack conveniences such as electric windows or airbags, making it hard for them to compete with imported brands despite their affordability.

Rajoelina vowed to boost Madagascar's limited industrial capacity after his election in 2018.

The island is one of the poorest countries in the world, with 90 percent of the population surviving on less than two dollars per day.