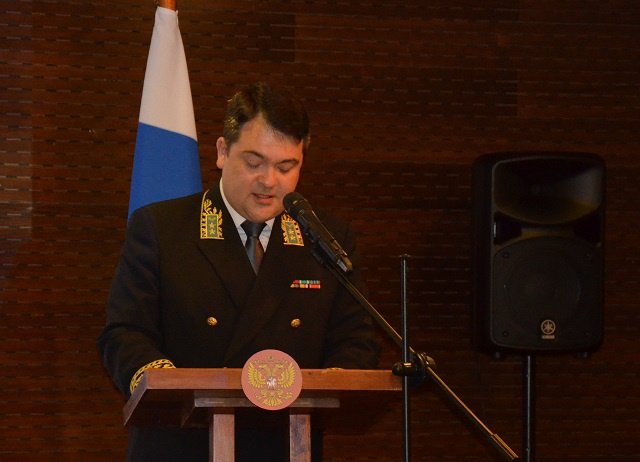 Ambassador Artyom Kozhin spoke during a reception on the occasion of the National Day of Russia. (Russian Embassy in Seychelles)

(Seychelles News Agency) - Maritime security, the blue economy,  science, and technology are spheres of opportunity that can deepen the partnership between Seychelles and Russia, the Russian ambassador said Wednesday.

Artyom Kozhin spoke during a reception on the occasion of the National Day of Russia, which is observed on June 12. The reception was delayed mainly because of pandemic-related restrictions.

Seychelles, an archipelago in the western Indian Ocean, and Russia established diplomatic ties once the island nation gained its independence in 1976.

Kozhin outlined that "the drive towards taking maximum advantage of these prospects has been significantly reinforced by the visit of President Danny Faure to the Russia-Africa Summit and Economic Forum, held in the city of Sochi in October last year."

"Another important step in the same direction is a recent designation by the Seychelles government of a new Honorary Consul to Russia, whose work will surely strengthen the bridges of friendship and mutually beneficial cooperation between our nations," said Kozhin.

He said that "for a long time, Russian investors have been steadily present in Seychelles. They contribute significantly to the development of the country, creating jobs and advancing bilateral economic cooperation."

This was echoed by the Vice President of Seychelles, Vincent Meriton, who said that the two countries enjoy a formidable relationship underlined by a desire to see progress on multiple frontiers and over the years, the bilateral relationship has excelled to new horizons.

"Russia has been instrumental in assisting Seychelles on numerous initiatives including its continued support in championing the plight of SIDs, offering first class educational opportunities to aspiring Seychellois and initiating the Russia-Africa Summit which is symbolic of the ever evolving ties between Russia and Africa," said Meriton.

The Russian ambassador said that "since 2015, our peoples enjoy mutual visa-free regime, which already increased the number of visitors travelling between Russia and Seychelles. And although tourism is in the pause mode at the moment while our countries stand together fighting COVID-19, the figures will surely pick up quickly once the world epidemiologic situation improves.,

This year, Russia celebrated the 75th anniversary of Victory Day. The celebration, which is a public holiday, takes place on May 9 and it commemorates the end of the Second World War in Europe. In his article published on June 19 to mark the occasion, the Russian president, Vladimir Putin, said "the efforts of all countries and peoples who fought against a common enemy resulted in victory."

The Russian ambassador to Seychelles said, "We believe the same approach must be applied in today's global context, given our struggle with the new common and dangerous enemy – COVID-19."

Meriton also spoke about the current situation brought about by the COVID-19 pandemic.

"As you know, this has undoubtedly been a turbulent year with the emergence of COVID-19, not just for our two countries but for the whole world. As a small island developing state, Seychelles simply cannot afford to have an outbreak," he said.

Meriton added that Seychelles must continue to be vigilant in its endeavours to keep this invisible enemy at bay and reopen its economy and "to this end we are confident that travel between our countries will resume in the near future."