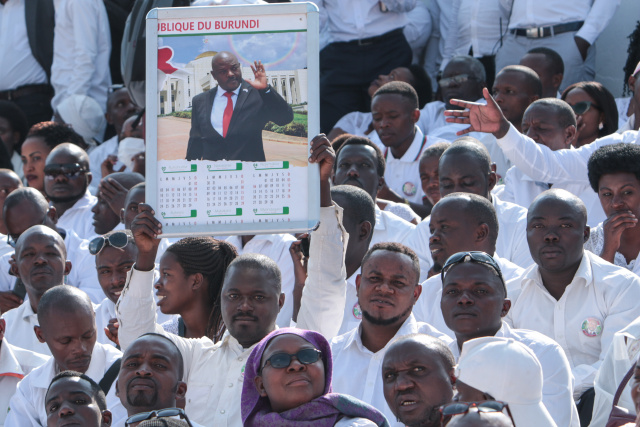 A man holds a calender with the portrait of late Burundi President Pierre Nkurunziza, who died at the age of 55, as people wear white clothes while attending the national funeral at the Ingoma stadium in Gitega, Burundi, on June 26, 2020. (TCHANDROU NITANGA / AFP)

(AFP) - Thousands of Burundians on Friday lined the road to the capital Gitega as the body of former president Pierre Nkurunziza was escorted under heavy security for a state funeral after his sudden death earlier this month.

Nkurunziza, who ruled the country for 15 years, died at the aged 55 of what the government said was "heart failure".

But speculation is rife he may have caught the coronavirus, as his wife had been flown to Nairobi for treatment for the virus just two weeks prior.

The funeral ceremonies began with an "homage by his wife, Denise Bucumi Nkurunziza, his children and those close to him" in an intimate gathering at the hospital in the central city of Karuzi where he died on June 8, a governmental source told AFP on condition of anonymity.

Nkurunziza died shortly after an election won by his handpicked successor Evariste Ndayishimiye, who was sworn in last week.

Friday was declared a national holiday for the funeral, and school children in uniform, and citizens lined the roads waiting for the funeral convoy to pass.

The stadium in Gitega where the funeral ceremony is to be held was packed with citizens from across the country, all dressed in white at the request of authorities.

Nkurunziza will be buried at a monument recently built in Gitega at the site of another structure which was to be dedicated to victims of the country's various crises over the years, but was never inaugurated.

Nkurunziza, a devout evangelical who believed he was chosen by God to lead Burundi, left behind a deeply isolated country in political and economic turmoil.

His 2015 run for a third term in office sparked protests and a failed coup, with violence leaving at least 1,200 dead while some 400,000 fled the country.

A climate of fear marked by a crackdown on the opposition and media settled over Burundi, while a personality cult grew around Nkurunziza which saw the ruling party name him a "visionary" and "supreme guide for patriotism."