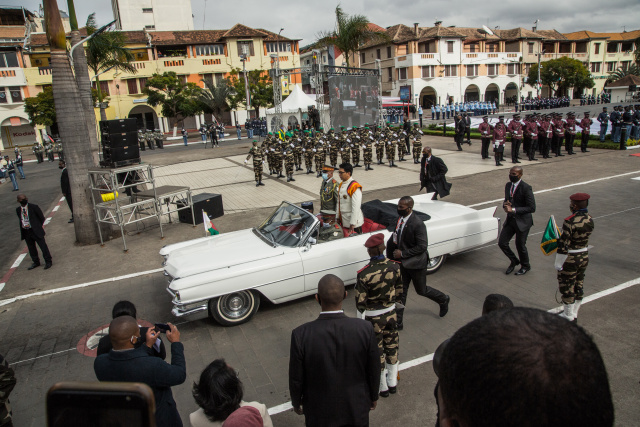 The President of Madagascar Andry Rajoelina (R, standing in the car) reviews the Malagasy military troops in Antananarivo on June 26, 2020 on the occasion of the traditional Malagasy Independence Day which was exceptionally organised on the Avenue de l'Indépendance in the city centre but without being open to the public. (RIJASOLO / AFP)

(AFP) - On the highest hill overlooking Madagascar's capital Antananarivo, on the site of a sacred pool and within the grounds of a royal palace, an uncanny piece of architecture is rising -- a concrete Roman-style amphitheatre.

The scheme is a pet project of President Andry Rajoelina, who claims it will showcase the Indian Ocean island's history and culture.

But the scheme is sowing discord across the country, with critics deriding it as Rajoelina's "Colosseum" and destructive of the country's heritage.

Few paid attention when the plans for the edifice were revealed over a year ago, with the goal of inaugurating it in time for Madagascar's 60th anniversary of independence from France in 2020.

Back then, Culture Minister Lalatiana Rakotondrazafy described the amphitheatre as a venue to "re-enact the history of our country in an educational, popular and cultural manner."

But eyebrows began to be raised as "Masoandro" -- "Sun" in the Malagasy language -- began to take shape.

Among the first to take aim were descendants of the sovereigns who occupied the Rova palace, a historic site which dates to the 17th century.

"We thought it would only involve simple ornamentation," said Christian Raoelina, grandson of the brother of Queen Ranavalona III, who in the late 19th century was Madagascar's last monarch.

"Our surprise when we saw the height of the building was all the greater," he said.

"We had not understood that the construction would bring major changes to the palace's landscape."

A charity association, the Friends of Madagascar Heritage (APM), was also startled by the Ancient Roman design.

"It seems evident that aside from its incongruity, this structure has nothing to do with the site's original architecture, the history of Madagascar and its culture," APM's president, Desire Razafindrazaka, said.

Razafindrazaka warned the "colosseum" would pose a threat to the royal palace's listing as a UN World Heritage Site.

In a February letter, the United Nations Educational, Scientific and Cultural Organization (UNESCO) itself deplored the damage to Antananarivo's "exceptional universal value".

The opposition has also fired verbal volleys, denouncing the "massacre" of a "sacred place" and "historical symbol".

Rajoelina accused his detractors of "bad faith" and brushed aside parallels beween the Masoandro and the huge gladiatorial arena in central Rome.

"The call for tenders was open from August to September last year and published in the most popular newspapers... for a whole week," the president said last month.

Raoelina complained the descendants should have been consulted as "heirs and owners of royal tombs", particularly given the arena was being erected on a "sacred site".

"The role of the state is to safeguard, rehabilitate and maintain the patrimony of the past," said artist Jean Andrianaivo Ravelona.

"Not to deform or trample it with new constructions."

Early this month, the public academy of culture and customs suggested staging national consultations to resolve the issue.

"We need to admit that as things stand, this construction is dividing the nation," its president, Raymond Ranjeva, told AFP.

But Rajoelina briskly shut down the proposal, making clear he would push ahead with his scheme.

"Do we want to restore national pride, yes or no?" asked the president rhetorically.

He defended the cost -- estimated at the equivalent of $1.6 million (1.4 million euros) -- and claimed that, when finished, the amphitheatre would lure thousands of visitors to see the palace.

But hopes that the building would be inaugurated in time for Madagascar's diamond jubilee on Friday have been dashed.