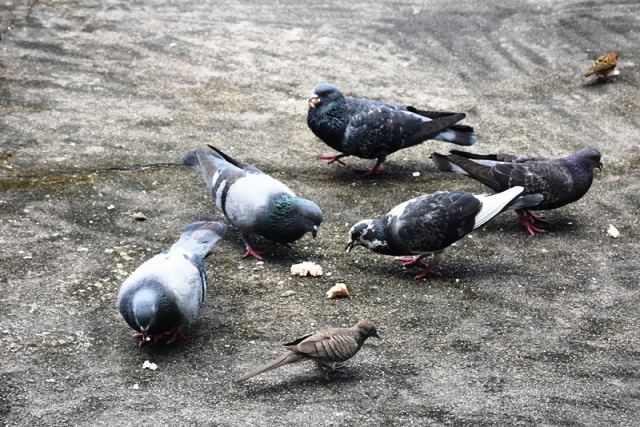 Pothin said a major concern is the continuous feeding of pigeons at schools and by other members of the public. (Seychelles Nation)

(Seychelles News Agency) - The Ministry of Environment, Energy and Climate Change in Seychelles has expressed concerns over the rising population of feral pigeons and recent sightings of the Indian House Crow, which is considered a threat to the local biodiversity and needs to be eliminated.

A conservation officer from the biodiversity conservation section of the ministry told the press last week that these species are not only a threat for the islands’ unique and fragile ecosystem but are a concern for human health.

Ashley Pothin said that tackling the population of feral pigeon and locating and eliminating the introduced Indian House Crow is now an urgency.

“Feral pigeons are considered as an invasive species, a nuisance species and hazard to human health and safety and contribute towards high maintenance costs of infrastructures as a result of accumulated faecal matters,” said Pothin.

The growing population of the feral pigeons can be noticed in the capital city of Victoria, at Ile du Port and Providence – both areas on the outskirts of the city. Between the three sites, a population of around 1,000 birds could be observed. At Ile Du Port, the situation is very apparent at the Palais Justice where the pigeon’s droppings could be found all over its once pristine white façade.

State schools have also been badly affected by the pigeons. In the past, there were several attempts to trap and control these species, but there was little success.

“A major concern is the continuous feeding of pigeons at schools and by other members of the public. The biodiversity conservation section would like to discourage the public from feeding the feral pigeons especially in public areas," explained Pothin.

The conservation officer added that people must dispose of food scraps in an appropriate manner as the availability of food is a key component in the increase of the pigeon population.

“From 2019 until to date we have received 10 complaints of a feral pigeon infestation. The role of the ministry is to provide advice and the way forward to different departments on how to deter pigeons from buildings,” explained Pothin, adding that each organization should put in place funds for ongoing control programmes.

The domestic pigeon is the world's oldest domesticated bird. In Seychelles – 115 islands in the western Indian Ocean – it is believed that the pigeons were introduced on the islands by early settlers as a source of food.

Biodiversity consultant Elvina Henriette told SNA that a proper education campaign should be done around the pigeons as she believes that the feral pigeons were once someone’s pet.

“People here traditionally kept pigeons as pets, and I believe these were then released and now we have an uncontrolled population. Whilst a campaign around responsibility for pigeon owners should be done I think the authorities should also look at capturing these birds and try and get people interested to keep them as pets,” said Henriette.

Henriette believes that people keeping the pigeons should look also at selling the birds for consumption instead of setting them free.

The sightings of two Indian house crows and which are still believed to be out and at large since January this year is another concern for environment officials.

“In recent months, we have had an increase in reports of the birds being sighted and it is unsure if it is the same birds as they travel long distances. In only two months we have received almost six reports of confirmed sightings. As a result of increased port activities, their occurrence in Seychelles has been observed on several occasions recently,” explained Pothin.

The crows, which are invasive creatures, are aggressive in nature and are known to feed on smaller species, and according to the conservation officer, this is a big concern to the protection of these species with some being endemics. The ministry is encouraging the public to urgently report any sighting of the crows and there is a bounty of $28 for the crows dead or alive.