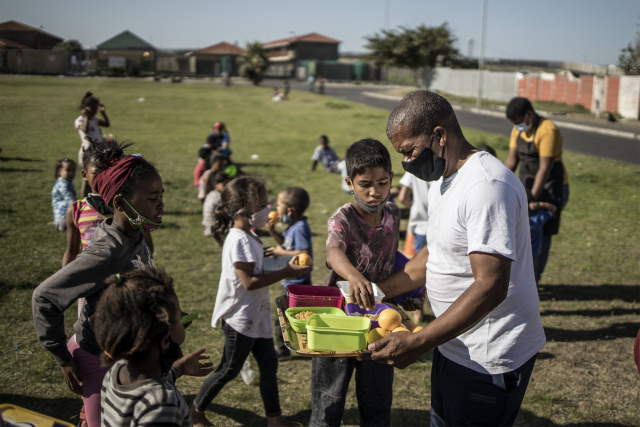 Mark Nicholson distributes food to children as they queue at a food distribution organised by volunteers of the Lavender Hill Sport and Recreation Foundation in Lavender Hill, Cape Town, on June 19, 2020. The organisation chaired by Mark Nicholson, who doubles as well as a football coach, reaches hundreds of children and adults daily since the beginning of the lockdown, in a community divided by gang violence. (MARCO LONGARI / AFP)

(AFP) - The coronavirus pandemic could set back incomes in sub-Saharan Africa by a decade as weak oil prices, a tourism standstill and business lockdowns shrink the region's economy 3.2 percent in 2020, an IMF official said Monday.

Activity is expected to recover in 2021, but countries first will have to get through a year in which many will see tepid growth at best, while those that rely on commodities or tourism will suffer severe declines.

"It is a worrisome picture, really, in terms of the economic outlook, and really reflects the continuing weak global economic environment that countries in the region face," Africa director for the International Monetary Fund Abebe Aemro Selassie told AFP.

The continent is grappling with more than 383,000 cases of coronavirus, according to the Africa Centres for Disease Control and Prevention.

The IMF on Monday released its updated outlook for sub-Saharan Africa, showing the downturn is set to cause a drop in real per-capita income of as much as 15 percent in all but two countries, meaning the region overall will suffer a decline of 7.0 percent, back to where it was a decade ago.

With oil prices low globally, crude exporters will be badly hit. Nigeria is expected to shrink by 5.4 percent and Angola by 4.0 percent, its fifth straight year of economic contraction.

Flight bans and health concerns mean less tourists, and the IMF expects the Seychelles to shrink by 13.8 percent in 2020 and Mauritius by 12.2 percent.

Even diversified economies will suffer. Ethiopia's GDP is expected to grow just 1.9 percent in fiscal year 2020 then "stall completely" the following year, the IMF said.

South Africa, the continent's most-industrialized economy -- which also has the highest number of recorded coronavirus infections -- will contract 8.0 percent in 2020 due to lockdowns imposed to curb the virus, a risk Abebe said countries across the continent face.

"Unfortunately, the region remains still on the exponential side of how the pandemic is playing out in the vast majority of countries," he said.

"Absent vigilance, there's no reason why we cannot expect the same kind of dynamics that we've seen elsewhere in terms of the pandemic."

The Washington-based crisis lender has moved quickly to roll out support programs to help African economies weather the downturn, with aid totaling up to $10 billion over the last two months or so, and more to be announced, Abebe said.

Africa also stands to benefit from debt relief agreed to in April by the G20 representing the world's largest economies.

There is "strong willingness to provide" the relief and about 25 countries have applied, though details are still being discussed with some creditors, Abebe said.

The world's poorest continent is expected to rebound in 2021 with growth in sub-Saharan Africa of 3.4 percent, assuming lockdowns have eased and the pandemic does not get markedly worse with a second wave of infections.

But given the tentative nature of the "phase one" trade deal between the United States and China, and Washington's threat of new taxes on European goods amid a trade feud, Abebe warned that wider tensions could threaten Africa's recovery.

"A tense geopolitical environment, one which leads to adverse trade outcomes, growth outcomes, economic outcomes, will also have some spillover on the region."