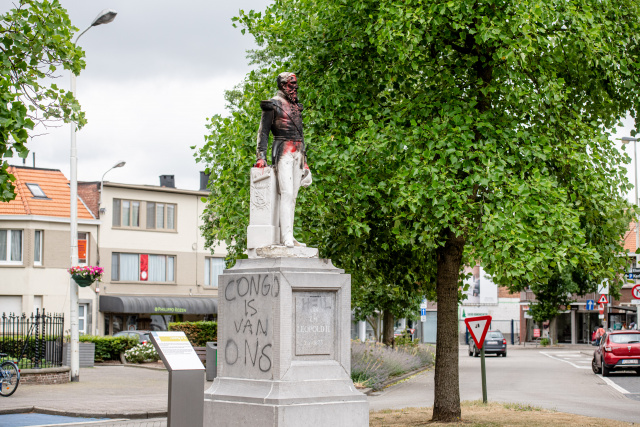 A statue of King Leopold II of Belgium with a racist graffitti on its side reading "Congo is ours" is pictured on June 4, 2020 in Antwerp after being set on fire the night before as a petition was launched on June 1 to remove all statues in honour of this colonial-era King from the City of Brussels amidst worldwide anti-racist protests following the death of George Floyd, a black US citizen who died after a white policeman kneeled on his neck for several minutes. The Belgian port city of Antwerp took down a statue of late King Leopold II on June 9, 2020 just days after it was daubed with paint by anti-racism protesters. Statues of Leopold have long been a target of activists because of his record of brutal colonial rule in Belgium's former central African colonies. (JONAS ROOSENS / Belga / AFP)

(AFP) - Belgium's monarch expressed his "deepest regrets" on Tuesday for colonial abuses in DR Congo, in an unprecedented gesture for his country that Kinshasa swiftly hailed as "balm" for the Congolese.

King Philippe made his remarks in a letter to the president of the Democratic Republic of Congo, Felix Tshisekedi, on the 60th anniversary of Congo's independence on June 30, 1960.

The death of African American George Floyd last month as he was being arrested by police in the US city of Minneapolis has also stoked fresh debate in Belgium over its colonial record.

Belgium's colonisation of the vast mineral-rich country was one of the harshest regimes imposed by European powers that ruled most of Africa in the late 19th and 20th centuries.

The scars remain, with two-thirds of the population living below the poverty line and the country riven by conflict and instability.

"I want to express my deepest regrets for these wounds of the past whose pain is reawakened today by the discrimination still present in our societies," Philippe said.

Historians say that millions of Africans from areas in what is now the Democratic Republic of Congo were killed, mutilated or died of disease as they worked on rubber plantations belonging to Leopold II, king from 1865-1909.

Philippe, without mentioning Leopold by name, said that during this period "acts of violence and cruelty were committed which weigh on our collective memory".

"The colonial period which followed (1908-60) also caused suffering and humiliation," he said.

On the day Congo broke away from Belgian colonial rule, the country's prime minister and independence icon Patrice Lumumba delivered a scathing speech about the racist maltreatment.

"We experienced the slurs, the insults, the beatings that we had to undergo morning, noon and evening, because we were negroes," he proclaimed.

DR Congo Foreign Minister Marie Ntumba Nzeza, in statement to AFP, said the king's letter was "balm to the heart of the Congolese people.

"This is a step forward that will boost friendly relations between our nations."

King Philippe said he would combat all forms of racism and wanted to encourage reflection on the issue begun by the Belgian parliament.

Several statues of Leopold, who ruled between 1865 and 1909, have been daubed with paint or torn down by protesters in Belgium in recent weeks, and a petition has been launched for their removal.

On Tuesday, the city of Ghent will mark the 60th anniversary of Congolese independence by removing a statue of Leopold.

"The time has come for Belgium to embark on a journey of truth," said Prime Minister Sophie Wilmes in Brussels during a ceremony marking Congo's independence day.

"All work of truth and memory begins with acknowledging the suffering of the other," she added.

The French-speaking daily Le Soir welcomed the royal intervention in an editorial: "Finally, this gesture, so necessary, which lifts the King and his country."

Through concession companies, Leopold II used forced labour to extract rubber in Congo, among other things.

Harsh treatment -- up to the cutting off of hands for unproductive workers -- have been documented.

According to most historians, the violence did not stop after Leopold II, and a regime of strict separation of blacks and whites was maintained for decades.

"People should be willing to repair the damage in terms of investment and compensation with interest. That's what we expect from our Belgian partners."

"This belated remorse can only be accepted after adequate reparations for these atrocities which enabled the personal enrichment of Leopold II and his friends," he said.

"Belgium's mischief-making after independence on June 30 1960 to control the DRC's minerals should also feature among reparation issues," he said, adding that looted Congolese artefacts should also be returned.