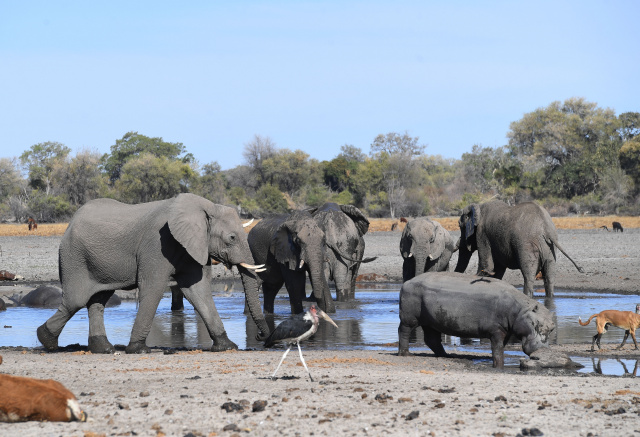 Elephants drink water in one of the dry channel of the wildlife reach Okavango Delta near the Nxaraga village in the outskirt of Maun, on 28 September 2019. The Okavango Delta is one of Africa's last remaining great wildlife habitat and provides refuge to huge concentrations of game. Botswana government declared this year as a drought year due to no rain fall through out the country. (MONIRUL BHUIYAN / AFP)

(AFP) - Hundreds of elephants have died mysteriously in Botswana's famed Okavango Delta, the wildlife department said Thursday, ruling out poaching as the tusks were found intact.

The landlocked southern African country has the world's largest elephant population, estimated to be around 130,000.

"We have had a report of 356 dead elephants in the area north of the Okavango Delta and we have confirmed 275 so far," Cyril Taolo, the acting director of the department of Wildlife and National Parks, told AFP in a text message.

He said the cause of the deaths was yet to be established with anthrax having been ruled out.

"We do not suspect poaching since (the) animals were found with tusks," he said.

Samples have been collected and sent to specialised laboratories in South Africa, Zimbabwe and Canada for testing.

Similar deaths were first reported in May when authorities found 12 carcasses in just a week in two villages in the northwest of the country.

"It seems they were dying very suddenly in some cases," conservation biologist, Keith Lindsay told AFP, adding that the deaths were sudden.

"The carcases were animals that had fallen down while walking... right on their sternum which is very unusual," said Lindsay.

"Up to now there doesn't seem to be any clear sign of the reason for it. When something like this happens it is alarming."

The latest discoveries were flagged by a wildlife conservation charity, Elephants Without Borders (EWB), whose confidential report referring to the 356 dead elephants, was leaked to the media on Wednesday.

EWB suspects the elephants have been dying in the area for about three months.

According to the report dated June 19, 2020, "70 percent of elephant carcasses were considered recent, having died about a month ago, and 30 percent of the carcasses appeared fresh, ranging from one day to two weeks old".

"There was good evidence to show elephants of all ages and sex appear to be dying," said the report penned by EWB director Mike Chase.

Several live elephants appeared to have been weak, lethargic and emaciated, with some showing signs of disorientation, difficulty in walking or limping, EWB said.

"One elephant was observed walking in circles, unable to change direction although being encouraged by other herd members," said the report.

For conservationist Neil Fritt the strange phenomenon is "tragic" but appears to be "more like a natural occurrence as opposed to direct human cause," he told AFP.

Botswana has an overpopulation of elephants which President Mokgweetsi Masisi has flagged as the source for much of the human-animal conflict in the country.

In February the southern African country held its first major auction for trophy elephant hunting quotas since controversially scrapping a hunting ban last year. But the hunting season was suspended due to the coronavirus pandemic