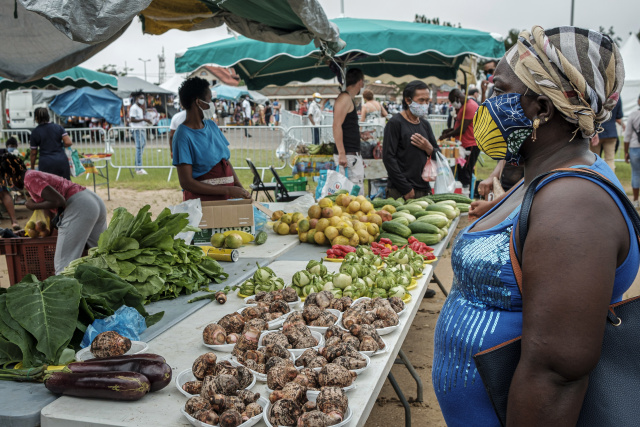 A woman wearing a protective face mask stands in front of a fruit and vegetables stall at the market of Saint-Laurent du Maroni, French Guiana on June 13, 2020, during the spread of the COVID-19 (the novel coronavirus). French President Emmanuel Macron said on June 14, 2020 that France had marked its first victory in the fight against the coronavirus pandemic, ending much of its lockdown. Only the overseas territories of Mayotte and French Guiana will remain at the "orange" alert level, with high numbers of cases still posing a threat to strained hospital systems.(jody amiet / AFP)

(AFP) - As mainland France heaves a sigh of relief after seemingly seeing off the worst of the coronavirus outbreak, its South American territory of Guiana is bracing for a fast-worsening onslaught.

The sparsely-populated French territory, officially one of France's 101 administrative departments, is only now seeing its caseload accelerate as the virus expands its foothold in the Americas.

Last week, France's minister for overseas territories, Annick Girardin, appealed in the French parliament for "solidarity" with Guiana, which she said was in urgent need of some 300 extra medical personnel as hospital beds fill up fast.

"We do not have enough human resources," she pleaded with lawmakers shortly after paying a visit to the territory bordering Brazil. "We must rise to the occasion."

The epidemic in Guiana is expected to peak around mid- to end-July. It is several weeks behind metropolitan France where close to 30,000 people have died in the unprecedented global outbreak, but where new infections and hospitalisations are on the decline.

The territory -- population 300,000 -- has three public hospitals in the capital Cayenne and the nearby town of Kourou, which hosts Europe's spaceport and rocket launch pad.

The forested territory, about the size of Portugal, is one of the poorest parts of France, with an acute lack of schools and paved roads, high unemployment and residents who say they feel abandoned by Paris.

"What is certain is that our hospital system is not in the best shape," said Remi Mutricy, a 30-year-old emergency doctor at the biggest hospital, the Centre Hospitalier Cayenne (CHC), which had 16 intensive care beds and about 250 doctors at the start of the epidemic.

Since mid-June, the CHC has seen patient numbers rise from 59 to 127, and the number of people admitted for intensive care nearly double from 11 to 20.

Reported deaths in Guiana's hospitals increased five-fold, from three to 16, in two weeks, and the number of confirmed infections now exceeds 4,000.

Medical personnel in a country also battered by dengue and other diseases common to tropical areas, have been battling the epidemic since March, and are wearily preparing themselves for the long haul.

"The main challenge is fatigue management, and our capacity to make (hospital) beds available... in time," said Mutricy, complaining of a heavy "mental load".

French Guiana is perched on the northeast corner of South America some 7,000 kilometres across the Atlantic from Paris.

It remains under strict home confinement rules and a curfew is in place.

In France as a whole, only Guiana and Mayotte in the Indian Ocean remain "orange" on an outbreak tracking map updated daily, although in Mayotte the situation has vastly improved.

Mainland France and its other territories of Martinique, Guadeloupe and Reunion island, are classed a safer "green".

In 2017, Guiana was marked by strike action by locals, including nurses and doctors, demanding "emergency" funding of some two billion euros ($2.25 billion) to improve medical care and other services.

Protesters shut down the Kourou spaceport, the territory's main private employer, for several weeks to demand a "takeoff plan" for the area whose other main economic activities are fishing and foresty.

The public sector is the biggest provider of jobs in Guiana.

At the time, the government of President Francois Hollande agreed to a funding package worth one billion euros and agreed in principle to invest another 2.1 billion euros over an unspecified timeframe.

In recent days, Paris has sent a military plane to Guiana to help evacuate patients, and deployed about 100 reinforcement medical staff from mainland France.

At the CHC in Cayenne, a field hospital has been erected with a dozen extra beds. But regional leaders say much more is needed, including many more doctors.

On Monday, France's public health authority described the situation in Guiana as "worrying", and said health officials were mobilised to slow the spread of the epidemic, identify outbreak clusters, and break transmission chains.