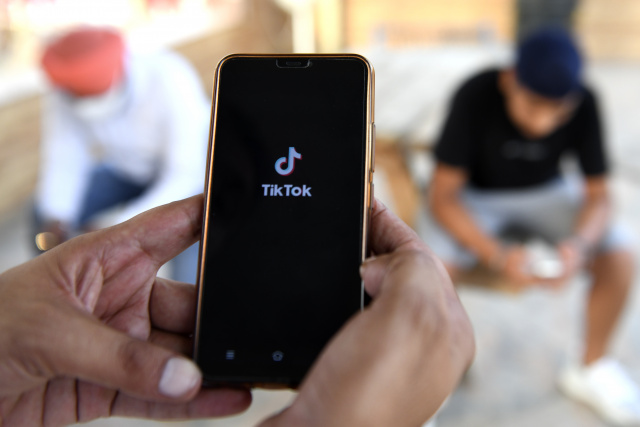 Indian mobile users browses through the Chinese owned video-sharing 'Tik Tok' app on a smartphones in Amritsar on June 30, 2020. TikTok on June 30 denied sharing information on Indian users with the Chinese government, after New Delhi banned the wildly popular app citing national security and privacy concerns.
"TikTok continues to comply with all data privacy and security requirements under Indian law and have not shared any information of our users in India with any foreign government, including the Chinese Government," said the company, which is owned by China's ByteDance. (NARINDER NANU / AFP)

(AFP) - Secretary of State Mike Pompeo has said the US is "looking at" banning Chinese social media apps, including TikTok, over allegations Beijing is using them to spy on users.

India has already barred the wildly popular TikTok app over national security and privacy concerns while other countries are reportedly mulling similar measures.

Asked on Monday by Fox News's Laura Ingraham if the US should consider blocking the apps -- "especially Tik Tok" -- the country's top diplomat said the Trump administration was "taking this very seriously; we are certainly looking at it."

Pompeo said the US had been working for a "long time" on the "problems" of Chinese technology in infrastructure and was "making real progress."

"With respect to Chinese apps on people's cell phones, I can assure you the United States will get this one right too," he said.

"I don't want to get out in front of the president, but it's something we are looking at."

Pompeo earlier lashed out at what he called China's "Orwellian" moves to censor activists, schools and libraries in Hong Kong under a sweeping new security law.

Authorities in the financial hub have ordered schools to remove books for review under the law, which has criminalized certain opinions such as calls for independence or more autonomy.

Libraries in Hong Kong said they were pulling titles written by a handful of pro-democracy activists.

"With the ink barely dry on the repressive National Security Law, local authorities -- in an Orwellian move -- have now established a central government national security office, started removing books critical of the CCP from library shelves, banned political slogans, and are now requiring schools to enforce censorship," he said.

Pompeo condemned what he called the "latest assaults on the rights and freedoms of the people of Hong Kong."

"Until now, Hong Kong flourished because it allowed free thinking and free speech, under an independent rule of law. No more," he said.

Beijing has faced a groundswell of criticism from primarily Western nations over its decision to impose the security law, which outlaws acts of subversion, secession, terrorism and colluding with foreign forces.

US Vice President Mike Pence told CNBC last week that the law was a "betrayal" and "unacceptable to freedom-loving people around the world."

The act would punish banks -- including by blocking loans from US institutions -- if they conduct "significant transactions" with officials who violate the city's autonomy.

President Donald Trump must sign the legislation for it to take effect.