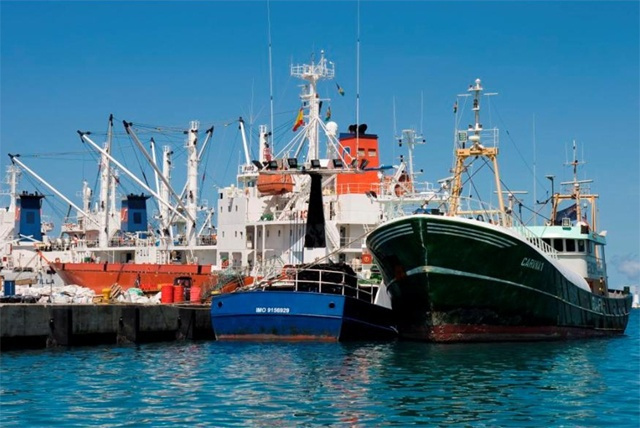 Gedeon said that all active cases are quarantined on 12 vessels stationed in a quarantine zone outside of the Seychelles’ Port Victoria. (File photo: Seychelles Fisheries Authority)

(Seychelles News Agency) - Another 13 seafarers on the Spanish fishing fleet in the Seychelles’ waters have tested positive for COVID-19, bringing the total positive cases to 83 among the fishermen, a top health official said on Tuesday.

In a warning to the Seychellois public, the Public Health Commissioner, Jude Gedeon, told a press conference that authorities are considering shutting down some businesses and even beaches in the island nation because too many people are not following health guidelines

In view of the possibility that there may be Seychellois who have been in contact with the seafarers, Gedeon reiterated the importance for people to practice their own personal safety, namely keeping social distances and good sanitisation practices.

Gedeon gave a warning about not respecting health guidelines in bars, restaurants, casinos and on beaches.

“If this behaviour continues, we will have community transmission that will spread easily. So we are considering seriously shutting down the places that are welcoming many people at the same time,” he said.

Gedeon said that he hopes that the Department of Health will not have to reintroduce serious restrictions as before especially as Seychelles will be reopening its borders to scheduled passenger flight as of August 1.

As for the new positive COVID-19 cases among the seafarers, Gedeon said that since the initial 70 cases were detected, 13 more seafarers have tested positive.

“The day before yesterday we started restesting crew from two vessels and we picked up nine Spanish who tested positive, one Kenyan and three West African crew making the total 13,” said Gedeon.

He said that the all active cases are quarantined on 12 vessels stationed in a quarantine zone outside of the Seychelles’ Port Victoria.

“The good thing is that they all remain asymptomatic, they are well. Usually, if you pass two weeks without any symptoms it is unlikely that you will become ill.”

Gedeon added that as Tuesday is 14 days since the first seafarers tested positive, the Department has “started the testing of contacts and we may pick up cases because the contacts have been with a large number of people who are positive.”

Seychellois who may have been in contact with the seafarers will also be tested.

“We have also done contact tracing with many Seychellois who have been in contact with the seafarers including cabin crew, ground handling staff, drivers and handymen. They are being sampled for testing as of today. It is highly likely that some of them will test positive and we will do the necessary to isolate them,” said the Public Health Commissioner.

By Wednesday there will be only one person in the isolation facility at Perseverance.

“We have two persons at the isolation centre in Perseverance, one is being discharged today, the other one is recuperating, hopefully by the end of the week he will also be discharged,” said Gedeon.

As for persons in quarantine on the main island of Mahe, the chief executive of the Health Care Agency, Danny Louange, said there are 76 people at the Berjaya Beau Vallon Bay and 20 at the south east island facilities making the total 96.