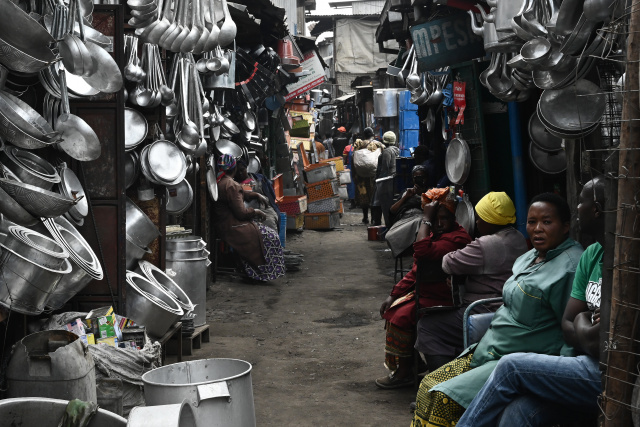 Jua Kali artisan traders sit outside their shops as they wait for customers at Gikomba Market in Nairobi, Kenya, January 15, 2019. An estimated 83.1 per cent of the country's total labour force or about 13.3 million persons eke out their living in the informal sector, where production is mostly bogged down by inefficiencies. (SIMON MAINA / AFP)

(AFP) - Kenya on Wednesday launched talks to seal a free trade agreement with the United States which it hopes will transform its economy, despite criticism it will undermine regional integration.

Trade Minister Betty Maina said striking the bilateral trade agreement was crucial to "secure trade and investment relations" ahead of the lapse of the African Growth and Opportunity Act (AGOA) in 2025, which eliminates import tariffs on goods from eligible African nations.

Kenya hopes to promote the export of textiles, clothing, tea, coffee and fish to the US - currently Kenya's third-largest export market and seventh overall trading partner.

More than 70 percent of Kenya's exports are duty-free under AGOA.

"We estimate that if we can only capture five percent of the US market for these products we could increase our export revenue by more than two trillion shillings ($18.8 billion, 16.5 billion euros)," Maina said.

"We therefore expect such an agreement will help us increase investment, both domestic and foreign... and in our view open up vast opportunities for Kenyan businesses," she added.

An initial round of two weeks of talks would begin on Thursday, and Kenya hopes to conclude the deal within 12 months, Maina said.

Plans to begin talks on the bilateral trade agreement were announced after President Uhuru Kenyatta visited US President Donald Trump in February.

"Kenya would be the first country in sub-Saharan Africa to enter a free trade agreement with the United States," Interior Minister Fred Matiangi said at the launch.

The agreement would "go beyond AGOA", US Ambassador Kyle McCarter said, and would make Kenya "more competitive and stronger economically".

McCarter added that a trade agreement with Kenya would serve as a model for further such deals across Africa.

Critics argue, however, that it would jeopardise agreements Kenya has with its east African neighbours, as well as a planned continent-wide free trade area.

A letter sent out Tuesday signed by 27 NGOs and trade and rights groups across the continent warned the deal would cripple Kenya's agriculture and manufacturing sectors and undermine efforts to increase intra-regional trade.

"The discussion on a post-AGOA future needs to be collectively done by African countries and not a single country rushing to conclude an agreement with such far-reaching consequences," read the letter addressed to the Kenyan government, the African Union and others.

Interior Minister Matiangi dismissed the concerns, saying the deal would "strengthen, not weaken, our regional commitments".

General » Be a reporter: Write and send your article » Subscribe for news alert
Tags: Kenya, US, trade, diplomacy