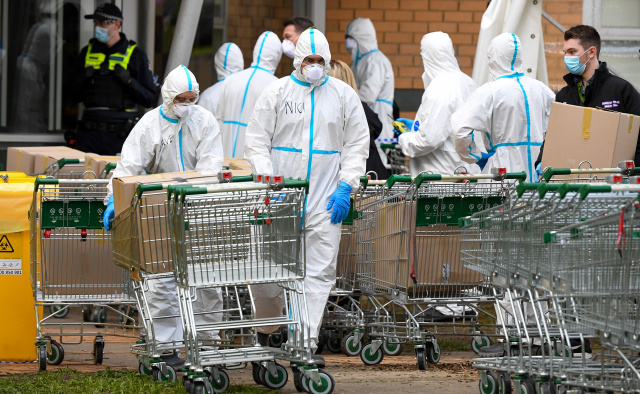 Members of the Melbourne Fire Brigade (MFB) prepare to take food parcels to residents in a locked down public housing estate in Melbourne on July 9, 2020 as the city re-enters a city wide lockdown after a fresh outbreak of the COVID-19 coronavirus. Five million people in Australia's second-biggest city began a new lockdown, returning to tough restrictions just weeks after they ended as Melbourne grapples with a resurgence of coronavirus cases. (William WEST / AFP)

(AFP) - Millions in Australia's second-biggest city went into lockdown Thursday to battle another coronavirus outbreak, as spikes across the world added to the devastation already wrought by the pandemic.

The number of infections and deaths has risen relentlessly in many of the world's biggest nations, with the United States crossing three million confirmed cases.

In Melbourne, five million people began a new lockdown just weeks after earlier restrictions ended as Australia battles a COVID-19 resurgence, with residents bracing for the emotional and economic costs.

"I hope that people have got the message that they really need to take notice -- it's very disconcerting watching some people on the news where they really don't care."

With no vaccine or effective treatment available, experts have warned that social distancing is necessary to contain the virus -- despite opposition in many parts of the world due to economic costs and misinformation.

Shoppers in Victoria state -- of which Melbourne is the capital -- stripped shelves bare on Wednesday before the lockdown began, and the country's largest supermarket chain said it had reimposed buying limits on items including pasta, vegetables and sugar.

Across the world in Europe, where many nations have successfully suppressed their outbreaks, the French government said it remained on alert for a possible surge in cases too.

The coronavirus is known to have infected nearly 12 million people, with deaths approaching 550,000 and the global economy suffering a catastrophic downturn.

The United States remains the worst-hit nation, with confirmed cases topping three million, but President Donald Trump remains keen for the economy to restart despite warnings about the dangers of reopening too soon.

He has even faced off with his own government's experts, lashing out at the Centers for Disease Control and Prevention for issuing school reopening guidelines that he complained were too restrictive.

Local officials in many parts of the country are scrambling to contain the virus with the US reporting tens of thousands of cases a day.

Several American cities and states have been forced to roll back their reopening measures.

The Trump administration has set off alarm bells among foreign students at American universities, saying they cannot stay in the United States if their entire courses are forced online because of the pandemic.

"I'm kind of scared... I don't have anyone to take care of me if I get ill," said an Indian graduate student in Texas, who asked not to be named.

Some of the world's most populous nations including India, Pakistan and Brazil are still reeling from their first outbreaks.

In other parts, where there had been some success against the virus, citizens have chafed under renewed restrictions to counter fresh waves of disease.

Many have accused their governments of mismanaging COVID-19 responses, and Serbia saw anger spill over into street unrest.

Its capital Belgrade was hit by clashes for a second night as police skirmished with outraged demonstrators.

Clouds of tear gas and smoke filled the city centre in chaotic scenes that mirrored violence the night before, when thousands came out to protest the return of a round-the-clock weekend lockdown.

Critics have accused the powerful president of inviting a second wave of coronavirus infections by rapidly lifting the initial lockdown.

"The government only seeks to protect its own interests," said 53-year-old Jelina Jankovic at the rally.

"The people are collateral damage."