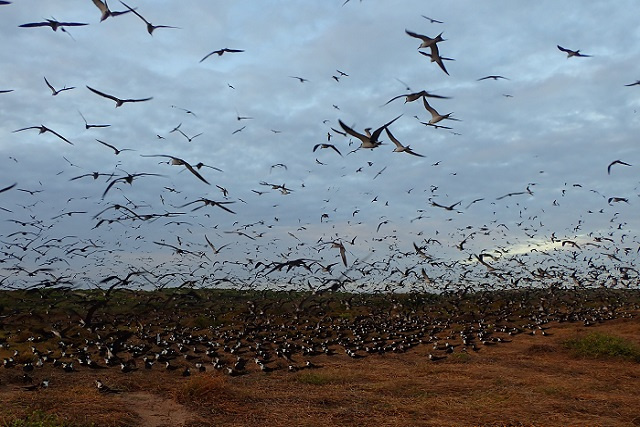 This will allow the species – whose eggs are a seasonal delicacy for the locals - to be managed in a more sustainable manner, preserving the egg gathering tradition (Island Development Company)

A national census will be held in 2021 to establish the true population of the sooty tern on the outer islands of Seychelles. This will allow the species – whose eggs are a seasonal delicacy for the locals - to be managed in a more sustainable manner, preserving the egg gathering tradition.
The chief executive of the Islands Development Company (IDC) made this announcement in a press conference on Wednesday to explain the collection and distribution of the birds’ egg.
Glenny Savy said the census will be organized in partnership with the island nation’s environment ministry and will involve foreign scientists collecting vital data on these species including their breeding and feeding patterns.
“There are so many questions to be answered if we start to collect these statistics, doing this census, going down the road we will be able to know a little bit more. What I think is more important is that in the absence of answers we must take up a strategy to prevent loss and ensure the conservation of our natural resources,” said Savy.
Savy said that the sustainability of these resources is of vital importance to the Islands Development Company, adding that the scientists who will be recruited will be those with experience working with the sooty terns.
This year 450,000 eggs were collected for the first time on Cosmoledo. This according to Savy is a marked reduction compared to an average of 700,000 eggs which the company normally collects every two years when this activity is carried out.
In the past, the collection of the birds’ eggs was done on the island of Desnoeuf. Earlier this year the cabinet of ministers gave its approval for Cosmoledo and another island – Bird Island, which is privately owned - to be added on the bird's egg collection schedule.
The operation to collect the eggs was led by the deputy chief executive of IDC Christian Lionnet who explained that the activity took eight weeks. He added that 16 staff were mobilized for the operation on Wizard, the biggest island of the Cosmoledo Atoll.
Lionnet explained that the consignment is expected on Mahe on Thursday evening and will be distributed to the public during the weekend. Earlier this year the company had given the public one month to place their orders for the eggs. Michael Govinden, Public Relations, and Communications Manager of the company explained that over 4,500 requests were received for the delicacy.
“Our staff are calling those who ordered the eggs and inform them of the day and time for the collection which will be on Saturday and Sunday. Each applicant will receive one carton of 90 eggs which will cost SR 450 ($25),” said Govinden.
The distribution of the eggs will be done in line with strict adherence to health authority guidelines, where limited people will be allowed in the warehouse and where people will be asked to sanitize their hands and maintain physical distances.
Bird Island, the other supplier of bird eggs in Seychelles – 115 islands in the western Indian Ocean – has been selling the eggs since the beginning of June.
Species » Be a reporter: Write and send your article » Subscribe for news alert
Tags: Bird Island, seasonal delicasy, Desnoeuf, Cosmoledo, Islands Development Company, sooty tern