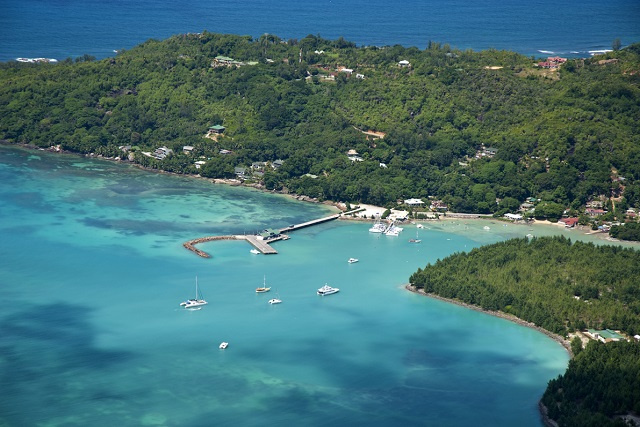 The project's aim was to conserve part of Baie St Anne by limiting fishing activities taking place in that area. (Gerard Larose, Seychelles Tourism Board)

(Seychelles News Agency) - An increase in the size and number of fish caught in traps was observed in an area around the main harbour of Praslin, Seychelles' second-most populated island, following a six-month voluntary fisheries closure.

The project, an initiative of the Praslin Fishing Association, started on November 1 last year and ended May 1. Its aim was to conserve part of Baie St Anne by limiting fishing activities taking place in that area, ultimately maintaining the fish stock and giving ample time for the stock to grow.

Darrel Green, the chairperson of the Association, told SNA on Wednesday that despite some challenges -- three fishermen didn't adhere to the voluntary shutdown-- the project was successful. The fishermen community on La Digue, the third-most populated island of Seychelles, saw the closure as a good initiative and want to implement the same in a bay on the island.

Green explained that before the closure, rabbitfish and parrotfish - the two main targeted species – measured on average between 22 and 24 centimetres and between 24 and 26 centimetres respectively. Data collected at the end of the closure period, show that both species had, on average, increased by six centimetres.

"We have also seen that there are more fish and this is one of our successes with the project. However, we faced some challenges as three fishermen were not abiding with the decision. They continued to fish in the area despite the fact that everyone agreed not to catch fish in this particular bay," he told SNA.

Green said that the reasons they gave were that initiative was not law.

"Yes, that is the case, though at times people need to realise that we do not have to always wait for the government to put in place a law so as to achieve something. We need to be conscious that resources in our waters are not for a certain group of people but rather for everyone," he explained.

He added that to prevent such behaviour from repeating in future closures, the association might ask the Seychelles Fisheries Authority (SFA), to make the closure obligatory. Closures will be at the same time every year. It is currently open and will close again on November 1 and reopen on May 1.

The beginning of the closure period coincides with the southeast monsoon which starts from May to September, a time when the wind is stronger, resulting in choppy seas. Green says that having a higher abundance of fish in the bay allows fishermen to trap fish in calmer waters.

"We are looking at the safety of fishermen and the practicality of things. The majority of these fishermen use a mini Mahe and it is challenging to go out to sea at this time of the year, and the work that needs to be done becomes much more difficult. However, if a fisherman can keep to the bay during southeast monsoon, where it is more sheltered, it makes life easier and safer," he said.

Fisheries is the second top contributor to the economy of Seychelles, a group of 115 islands in the western Indian Ocean.