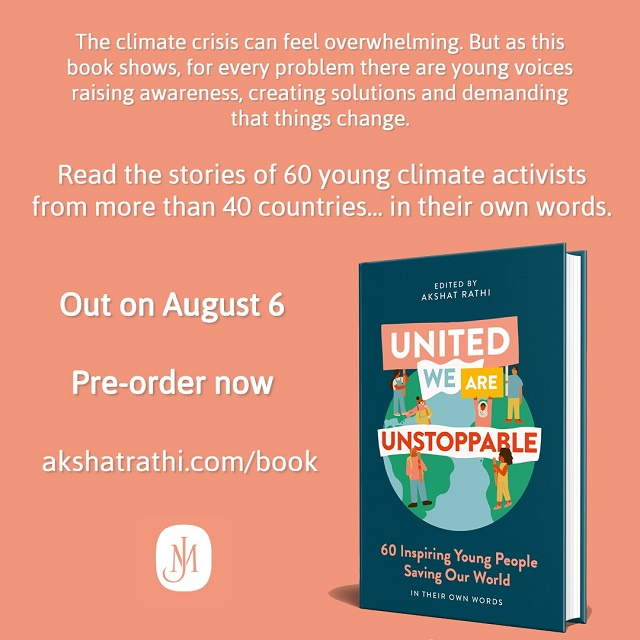 Entitled 'United We Are Unstoppable,' the book to be published by the British publisher John Murray Press. (Jeremy Raguain)

(Seychelles News Agency) - An environmental activist from Seychelles is featured in a book that amplifies voices worldwide that seek to raise awareness and provide solutions to combat the issue of climate change.

Entitled 'United We Are Unstoppable,' the book to be published by the British publisher John Murray Press and is scheduled for release on August 6. It tells the stories of 60 young environmental activists across 40 countries working to combat climate change.

The Seychellois environment activist, Jeremy Raguain, told SNA that the book shines a light on the experiences and outlooks of young people around the world who are taking action and leading by example in tackling the ecological and climate crises that their homes and communities face.

"Often young people can be seen as photo opportunities and talking points for politicians, media and bureaucrats, thus having a seat at the table but also becoming the silent 'furniture' in large public events," said Raguain.

He added that "however, with this book that has asked so many insightful questions of a diverse group of young people, we have been given a lasting platform to inform the public on what it takes to change our world for the better."

As a conservationist, Raguain has worked in the environmental field with the Seychelles Islands Foundation (SIF) for the last two years since completing his studies. His lifestyle and volunteer work have contributed to environmental protection and justice which to him contributes to human protection and social justice.

The editor of the book, Akshat Rathi, who has also worked to find the young climate leaders, said that the goal of the book is to elevate under-represented voices in the climate movement.

"Too often the stories that are told come from dominant groups in western society, but those stories are not representative of the experience of climate change felt by the majority of the world," said Rathi.

The editor said, "The stories these young climate leaders tell are both heartbreaking and inspirational. They put in context the pain felt by many, but they also reveal what a small but growing group is doing about them."

Rathi added that it's still not too late to avert the worst effects of climate change, but the challenge gets bigger by the day and these young people understand the importance.

On the question on how countries can use these solutions, the conservationist said: "The book can be understood as just an invitation to be informed of what is possible to then scale and replicate with those who are willing."