Seychelles beer production halts for 11 weeks, Guiness Brewery in Ireland will help with stocks if beer runs out 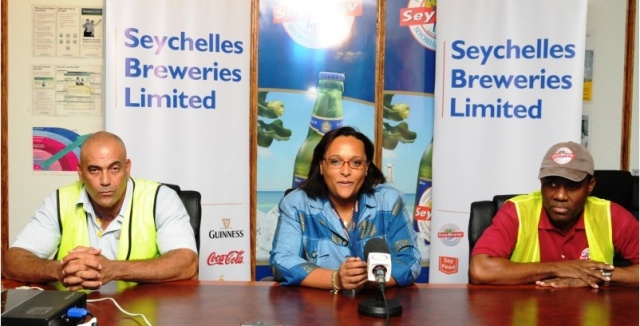 (Seychelles News Agency) - Seychelles Breweries Limited (SBL) will be closing its beer production plant temporarily to modernise its aging infrastructure. The replacement of production line equipment worth some $5 million means Seychelles’ favourite brand of beer, Seybrew, will not be produced for an estimated eleven weeks.

According to data from the World Health Organisation, Seychelles is the third highest consumer of beer per capita in the world, so the prospect of one of the mainstays of Seychellois culture running dry has had many palms sweating.

However, according to SBL’s managing director, Patricia Berthelot, the shutdown has been planned well in advance. The brewery has been building up stocks over the previous few months so that the supply will be affected as little as possible.

She explained that although the current equipment in the brewery is still operational, the efficiency of the aging equipment is only 32%, and that new machinery needed to be brought in to meet the industry standard of at least 50% efficiency.

“We are therefore modernizing the brewery, specifically the bottling line. We will be replacing our leveller, our washer and our pasteurizer and this requires a production shutdown,” said Berthelot.

Should demand exceed the stockpiles, master brewer and SBL’s supply chain director, Devon Francis, explained that the world-famous Guiness Brewery in Ireland would be able to produce Seybrew in a limited edition can and ship it to Seychelles.

“We have, over the last three months, built a stock beyond what we anticipate we will need over the next eleven weeks,” said Francis. “We expect the project to go according to plan but we need to be pragmatic and that’s why we have a contingency plan.”

SBL is the only brewery in Seychelles, which apart from beer also produces Coca Cola branded soft drinks.The production of soft drinks will continue as normal and will not be affected by the infrastructure upgrade.

Employees working at the brewery are also not expected to be affected by the closure, with most staff encouraged to take annual leave during the shutdown period and others staying at work to receive training from the engineering team installing the equipment.

“We already have very high standards set for our products,” said Berthelot, “but with an ailing production line the only way to ensure that we continue to deliver and exceed our expectations is to upgrade. Any company has to be willing to re-invest for continued growth and sustainability.”

“For the customer this means continued consumer satisfaction, as well as the potential for innovation as well,” she added.

The prevalence of commercial beer consumption in Seychelles stands at a whopping 85% of total alcohol consumed compared to an average of 37% in other African countries, securing its place in Seychelles as the alcoholic beverage of choice above the more traditional indigenous home-brewed fermented drinks.

In the beer per capita rankings, Czech Republic is first with 10.14 litres of beer per capita, followed by Palau with 8.68 litres, and Seychelles with 7.15 litres.