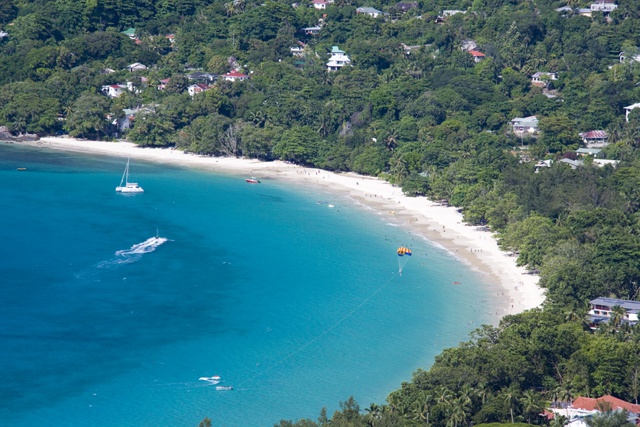 Mahe island of the Seychelles archipelago. Seychelles is amongst  the 11 African nations connected to the Indian Ocean which the new media platform will be focusing on for news analysis and feature stories. (Gerard Larose, STB)

Realizing that news coverage relating to the Indian Ocean region is largely dominated by tourism activities “revolving around sun, sand and beach” or the economic potential of hydrocarbon exploration and extraction in the region, Kabukuru felt the need to try to give communities in the region a real voice.

“Having lived and travelled into these countries in the course of my career as a journalist and interacted with all cadres of people it dawned on me that there was a need for a specialized platform that recognized the necessity of articulating the voices of islands and coastal communities,” he said in an email interview with SNA.

After coming to the conclusion that the lives of the people who inhabit coastal and island domiciles are inadequately covered or ignored, Kabukuru found that coverage of community-driven conservation efforts, security fears, pollution, changing habitats, political representation, cultural diversities, new port infrastructures, economic opportunities and the abundant marine research generated within the region were few and far between.

“It is these concerns among many others that IOO as a news analysis media house will churn out weekly,” he said.

More to the region than piracy and disasters

From Kabukuru’s extensive experience, the mainstream media will not give precious layout space or airtime to issues pertaining to the ocean, unless a disastrous event occurs. But he realized that he wanted to tell the story of how the ocean affects the lives of the people who are physically, economically and emotionally invested in it.

“Matters touching on the ocean are considered as important enough to secure front page and prime time news only when piracy or environmental disasters such as those posed by tsunamis, cyclones or even volcanoes occur,” said Kabukuru. “So, having interacted with fishermen, politicians, policy makers, journalists, business leaders, civil society members, maritime scientists and academicians I reached a conclusion that the need was real.”

“The idea itself began in the youthful years when innocence was king and romance was queen,” he reminisced. “We were a bunch of young lads then in the late 90s and we did plan to get a dhow – not a catamaran…not a yacht… nor a cruise ship.”

“We just wanted to get a dhow and sail from Lamu in Kenya all the way to Sofala in Mozambique. But that is a story for another day,” he said.

After taking a back seat for many years, the idea resurfaced again recently while Kabukuru undertook a climate change reporting project supported by the US based Solution Journalism Network (SJN) which covered the Western Indian Ocean region as a single environment story.

“This was when the idea not only took form but became what it is today,” he explained. “I shared with friends and family in the island states especially and across the world whose enthusiasm, encouragement, push and motivation is what you can see today.”

The regionally-specific media platform will be primarily focused on the 11 African nations connected to the Indian Ocean, namely the island nations of Comoros, Madagascar, Mauritius and Seychelles together with the coastal countries of Djibouti, Eritrea, Mozambique, Kenya, Tanzania, Somalia and South Africa.

Overseas territories such as Reunion, Mayotte and the Chagos archipelago will also direct some attention towards their Western administrators.

The IOO’s major focus will be on ground-breaking feature reports, in-depth news analysis and quarterly special reports which will be published both on our online platform and also in print format.

Kabukuru says the IOO’s team of 15 experienced journalists will look to highlight the issues that matter to the region as a whole.

“Our focus is influenced by the Indian Ocean and how it binds all these nations together,” he explained. “Look at an issue like climate change. The needs of coastal communities in mainland Africa and island states almost overlap ranging from sea-level rise to fisheries all the way to maritime trade. The same applies to oil and gas together with deep sea mineral resources.”

“A good example is what we have put out this week which details the territorial claims made by several countries in the Indian Ocean and how this has affected their respective relations. Ours is about exploring our core subjects of expertise from all angles and translating them for a global audience by showcasing how they affect the global community.”

A lighthouse of knowledge

In addition to coordinating the contributions of his team of skilled journalists, analysts and scientists spread out across all 11 countries with experience in various fields, Kabukuru also liaises with specialist media and marine support groups around the world and works to identify individual analysts who can capture the essence of life in the region.

“In our strategy we will be reaching out to like-minded media, academia and statutory bodies and forge closer collaborative ties,” he explained.

“One thing we are sure of is that the journey ahead will be thrilling as we will be dealing with enthusiastic people who love their respective jobs of connecting the dots to illuminate a region that is much celebrated for its beauty but remains largely undiscovered of its unrivalled charms.”

Swedish woman appears to have drowned off Seychelles' Praslin island