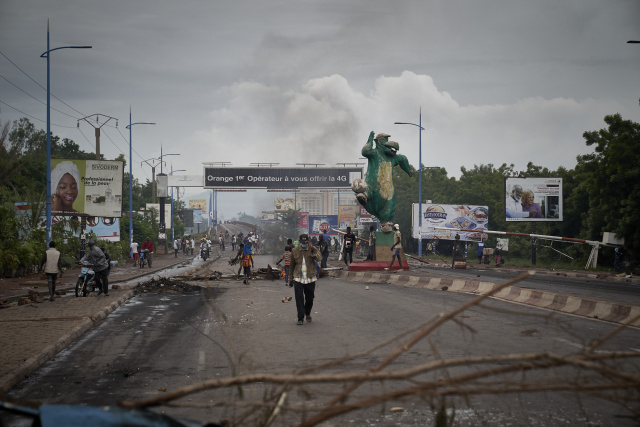 Protesters set barricades to block the circulation on the Martyrs bridge of Bamako on July 11, 2020. Malian Prime Minister Boubou Cisse on July 11, 2020 vowed to rapidly form a government "open to facing the challenges of the day", adding that four more people had died in the country's worst civil unrest in years. (MICHELE CATTANI / AFP)

(AFP) - Mali's embattled president announced the dissolution of the constitutional court in an attempt to calm the major civil unrest gripping the vulnerable African country, as more opposition leaders were arrested.

The court has been at the centre of controversy since it overturned provisional results for a parliamentary poll earlier this year, triggering protests in several cities that on Friday descended into violence.

Authorities say four people have died in the unrest, while six opposition figures have been detained in two days as the government cracks down on an alliance known as the June 5 Movement.

Keita said he had repealed the licences of all remaining members of the constitutional court so that new judges could be appointed from next week.

"The reformed court can quickly help us find solutions to the disputes arising from the legislative elections," he said in an evening television address.

Following a long-delayed parliamentary poll in March -- which Keita's party won -- the court overturned the provisional results for about 30 seats, a move that saw several members of Keita's party elected and is widely viewed as having ignited the latest crisis.

The 75-year-old president, in power since 2013, had already suggested last week that new constitutional court judges could revisit that decision.

As Prime Minister Boubou Cisse visited a Bamako hospital on Saturday he spoke of four dead and around 50 people injured in clashes with security forces on Friday, although doubts remained over the death toll from some of the worst unrest in years.

"The president and I remain open to dialogue," Cisse said, adding that he would quickly form a government ready to deal with the country's problems.

But almost as he spoke, Malian gendarmes arrested Choguel Maiga and Mountaga Tall, both leaders in the June 5 Movement, a group spokesman said.

Later Saturday, security forces turned up at the house of another opposition leader, Sy Kadiatou Sow, but were unable to find him, said a member of his family who did not want to be named.

Two other opposition leaders were arrested late Friday, the alliance said, and two figures considered intellectual pillars of the movement were also detained.

Friday's protest was the third such demonstration in less than two months, significantly escalating pressure on the president.

As flaming roadblocks appeared around Bamako on Saturday, the atmosphere was electric around the mosque where Dicko preaches, with his supporters seemingly afraid that the imam would be arrested.

Security forces used live ammunition as clashes broke out, seriously wounding several men, according to associates of Dicko who published photos of the injuries.

Keita warned Saturday that security would be maintained "with no signs of weakness", while indicating his willingness "to do everything possible to calm the situation".

Meanwhile the alliance called on the public "to maintain and step up this mobilisation until the aim is achieved, which is the resignation of the president".

The opposition's call for civil disobedience includes the non-payment of fines and blocking entry to state buildings.

Demonstrators attacked parliament and ransacked the national television station on Friday, only dispersing when the security forces opened fire.

This level of violence is rare in Bamako, which has been spared much of the unrest that is routine across swathes of Mali.

The country has struggled to contain an Islamist insurgency that first emerged in the north in 2012, before spreading to the centre of the country and to neighbouring Burkina Faso and Niger.

Thousands of soldiers and civilians have been killed and hundreds of thousands of people have been forced from their homes.