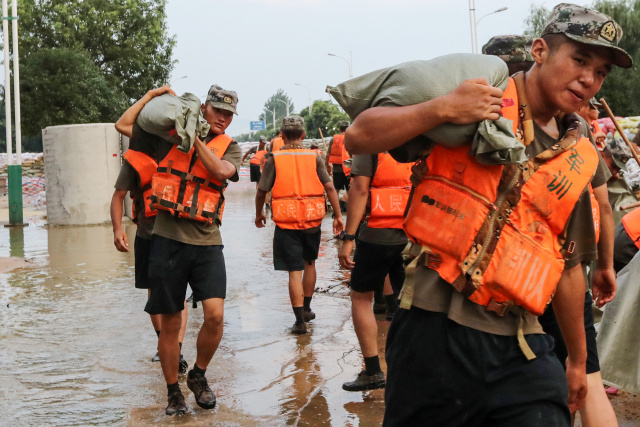 This photo taken on July 13, 2020 shows Chinese soldiers building an emergency levee along the shore of Poyang lake to contain flooding due to seasonal rains and the swollen Yangtze River in Jiujiang in China's central Jiangxi province. Floods across central and eastern China have left more than 140 people dead or missing and are swelling major rivers and lakes to record-high levels, with authorities warning that the worst was yet to come.(AFP)

The vast Yangtze drainage area has been lashed by torrential rains since last month, leaving 141 people dead or missing and forcing the evacuation of millions more across several provinces.

Flooding along the river -- the world's third longest -- has been an annual summer scourge since ancient times, but this year's inundation has been especially severe.

"Since June, average precipitation in the Yangtze river basin has been the highest since 1961," he told a news briefing in Beijing.

Authorities had been monitoring a flood crest as it neared Wuhan, the metropolis of 11 million that the Yangtze winds through and which had already suffered the vast number of China's deaths and cases in the coronavirus pandemic, which first emerged in the city.

They said river levels were decreasing after the crest passed Wuhan on Monday with no reports of major new flooding there.

Concern was now shifting downstream to Poyang Lake, which drains into the Yangtze in hard-hit Jiangxi province and is the largest freshwater lake fully within China's borders.

State-run Xinhua news agency said water levels at a key hydrological station on the lake broke a record set in 1998, when more than 4,000 people were killed in China's worst flooding in recent decades.

State media reported that more than 100,000 people -- including rescue personnel, soldiers, and ordinary citizens -- had been thrown into flood-control efforts in Jiangxi.

Around half of those were deployed at Poyang Lake, where many dikes and levees had collapsed, state television reported.

In the city of Jiujiang, near where the lake drains into the Yangtze, soldiers wearing orange life vests fortified the river bank with a wall of sandbags piled as high as a man.

The Yangtze's length is exceeded only by the Nile and the Amazon, and its drainage basin is home to around 400 million people.

But environmentalists say the threat has worsened over the decades due in part to rampant construction of dams and levees that have cut connections between the river and adjacent lakes and floodplains that for centuries had helped absorb the summer surge.

Conservationists also warn that the rapid melting of Himalayan glaciers due to climate change may lead to more dangerous summer flooding.