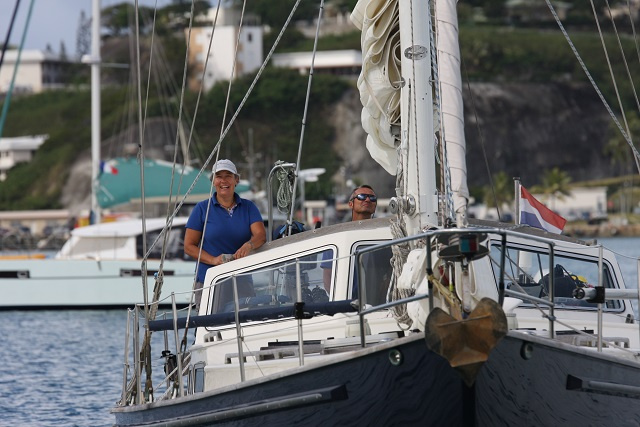 (Seychelles News Agency) - Sailing around the world is a challenging feat during which one has to overcome all of the dangers associated with crossing the world’s oceans. And that was before COVID-19 closed borders around the world.

A community of sailing enthusiasts has been at sea for years on a voyage to sail around the world. Amongst this community are Dutch couple Janneke Kuysters and Wietze van der Laan, who left the Netherlands in 2013 and who have made the Seychelles – 115 islands in the western Indian Ocean -- the 35th country they have visited during their eight-year voyage.

SNA caught up with the couple, who are relieved to be on land after spending 102 days onboard their ship ‘Anna Caroline’ in isolation in the Maldives’ waters after the closure of frontiers due to COVID-19. Their yacht Anna Caroline is moored in Seychelles' Eden Marina, while some other sailing yachts that came the same way are anchored in different places around the islands.

SNA: First, please tell us a little background about yourself.

JK: We were business people when we were still in the Netherlands. Wietze was director of a boatyard where Feadship superyachts were built, I owned a few consultancy firms. We now work as travel journalists for international sailing magazines while we sail around, we make articles about the beautiful places that we get to explore. Sailing around the world is our lifelong dream and we saved all our money to make this dream come true. We are part of a community of thousands of private boat owners all over the world doing the same thing. These ‘cruisers,’ as we are called, quietly sail around the world.

SNA: Tell us more about the voyage?

JK: We left the Netherlands in 2013 and sailed to southern Europe before crossing to Brazil in South America. We went south, all the way to Antarctica. And then back up again along the coast of Chile. From there to Easter Island, French Polynesia and Hawaii to Alaska, California, from there we crossed to French Polynesia again and across the Pacific to New Zealand. Then it was to New Caledonia and then around the bottom of Australia. Then a year in South East Asia, before sailing to Sri Lanka, Maldives and Seychelles. We have spent more time in cold areas than in warm, tropical waters.

SNA: How many countries have the voyage been to?

JK: We have visited 34 countries so far and before our return back to the Netherlands we plan to visit seven more.

WvdL: It was a very happy time for us.

SNA: What do you do in each country?

JK: We try to learn as much as we can of each country: the history, the language, the culture, the political situation and how the economy is doing. And, in every country, we do a cooking class to learn about local food. We are still looking for a nice cooking class here in Seychelles!

SNA: How about COVID-19? At what point did you learn about the pandemic?

JK: When we were in Thailand in early January, we heard of COVID-19, but it was something that happened in China. We sailed from Thailand to Sri Lanka and there we followed the news and found out that it had started to spread. But we weren’t alarmed, because it hadn’t reached the countries where we were planning to go. When we left Sri Lanka in March to sail to the Maldives, all was ok.

While we spent a week at sea, everything changed. Countries went into lockdown; borders were closed as a result of a worldwide pandemic. We were lucky that the Maldivian border wasn’t closed and that we had a safe place to anchor. The thought of being sent back to sea with literally nowhere to go was frightening. We had already quarantined for a week at sea, so we thought it was normal to go through another week of quarantine at anchorage. But the Maldivian government wanted to keep us in isolation. We were never allowed onshore and in the first weeks, we were not allowed to socialize with people on other boats too. This was tough because our boat is not very big.

WvdL: Just try to imagine being locked in a space the size of your kitchen with your family for a few weeks on end! The weeks passed in the sweltering heat. Our agent was the only one who could come near our boats for fuel, water and food. We completely had to rely on him. They forced us to remain in the north of the Maldives near a small village. We were at the end of the food supply lines. In short, there wasn’t a lot of fresh food available for us to buy there.

SNA: And at what point did you decided to come to Seychelles? Were you keeping tabs of what was happening on the island nation?

JK: The government of Seychelles had announced that the border would open for yachts from June 1 and that conditions apply. We waited patiently for news about the conditions. Every day we looked at the excellent website and Facebook page of the department of health if there was any news. Our Honorary Consul, Irina Udwadia, was most helpful. We were in touch via email almost every day and she kept us going with information and her descriptions of Seychelles. We dreamt about the beautiful islands and friendly people.

WvdL: And then it all went very quick. Once the form was available online, we filled it out and sent it in as fast as we could. Within 48 hours we had the approval! It was on Janneke’s birthday, we’ll never forget that. You have no idea how we felt when we saw the green hills of Mahe in the distance on the morning of our arrival. On that day, June 19, we had been in isolation for 102 days. Immediately after entering the coastal waters of Seychelles, we were met by a coastguard vessel and our details were recorded. We then proceeded to the quarantine anchorage where we waited for another 12 hours until a health officer came on board to check us. Then the ‘all clear’ was given and we pulled up anchor to moor in Eden Island Marina.

SNA: What are your plans whilst in Seychelles?

JK: First, I would like to say that we are very happy to be here. After the tough times in Maldives it is so nice to be able to move around freely. Our first priority now is to do the necessary maintenance of the boat and catch up on articles that we need to write. We write for five international sailing magazines including Zeilen in the Netherlands and Yachting World in the UK. Wietze is a photographer and has over 40,000 photos of our journey in his collection.

On our foldable bicycles, we plan to explore Mahe in the coming weeks. The Honorary Consul for the Netherlands, Irina Udwadia, has lived here for a very long time and she gives us excellent advice on where to go. She and her husband, Behram Udwadia, have taken us on a tour of the island already. We plan to take the ferry to Praslin and to La Digue to explore there and make lots of pictures for articles. We hope to be able to go to Bird Island too. By September we'll be cruising around Mahe and Praslin, waiting for a weather window to go to Madagascar.

SNA: What is the next step after Seychelles and when are you due back home?

JK: We are due back home in July 2021. After Madagascar, it is South Africa, Namibia, Saint Helena, Ascension Island, Azores, United Kingdom and the Netherlands. In total, we will have sailed 60,000 miles by then.