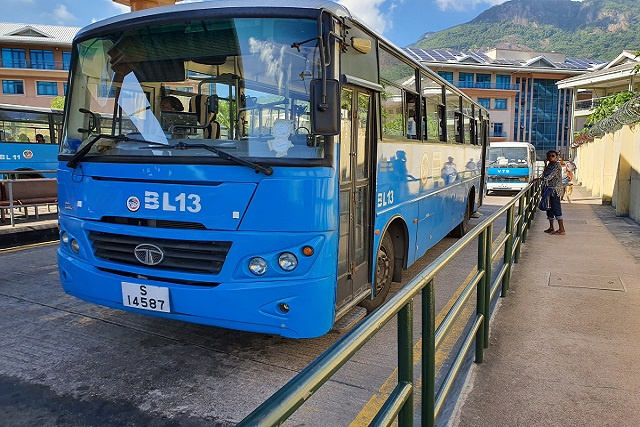 The Seychelles Public Transport Company (SPTC) is the only public transportation in the island nation. (Daniel Laurence, Seychelles News Agency)

(Seychelles News Agency) - Seychelles will conduct a pilot study next year with electric buses to test whether or not they work well as a mode of public transportation, said a top government official.

The pilot project will start with two electric buses which will be used for demonstration by the Seychelles Public Transport Corporation (SPTC).

"The buses will be run and tested. The aim is to analyse their efficiency on our roads. It will help us decide on the routes that the buses will take as Seychelles is a mountainous area and electric buses are not really designed for hilly roads," said Wills Agricole, Principal Secretary for Energy and Climate Change.

The Seychelles Public Transport Corporation established in December 1977 is the only public transportation service provider in Seychelles, and its services operate on the two most pupated islands of Mahe and Praslin.

A Seychelles-registered, privately funded company, Global Ocean Investments, has shown interest in investing in electric buses in the group of 115 islands in the western Indian Ocean.

The company's chief executive, Justin Etzin, told SNA that the importance of starting to remove the Tata fuel buses currently being used as public transportation by SPTC was raised in a meeting with President Danny Faure. He said that these buses are inadequate and unsuitable for the roads in Seychelles.

"The electric bus feels like a technology whose time has come. Cars and buses are responsible for about a quarter of worldwide emissions. Buses may be just a small number of the vehicles on the road in Seychelles but they have an outsize effect on the environment because they're so dirty," said Etzin.

He added that "electric buses on the electric grids into which they are plugged are much better for the environment. They are also just much nicer to be around with less vibration, less noise and zero exhaust. Plus, in the long term, electric buses have much lower operating costs. They have streamlined electric engines and easier to maintain."

The Seychelles' electric mobility project which will cost $500,000 is being done by the Ministry of Environment Energy and Climate Change and the Department of Land Transport and financed by the United Nation's Global Environment Facility (GEF).

"The government of Seychelles recognizes that reducing dependence on fossil fuels for the transport sector through low carbon transport strategies is desirable to reduce air pollution and GHG emissions," said Agricole.

Seychelles has an energy policy 2010-2030  in place as a guide towards reducing consumption of fossil fuels by 15 percent by 2030.

The project will also make way for new business models and infrastructures to be developed including the integration of solar charging stations around the three most populated islands, Mahe, Praslin, and La Digue.