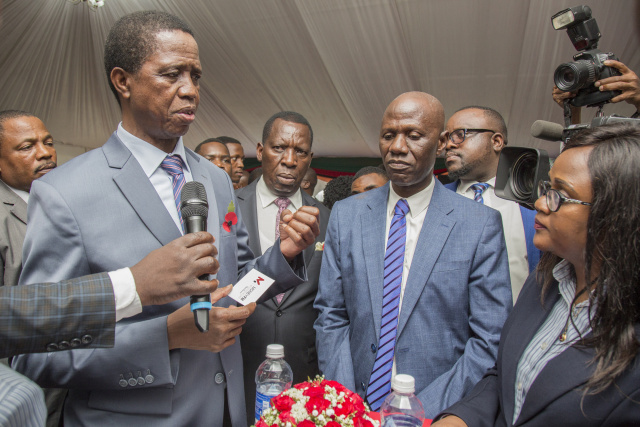 Zambian President Edgar Lungu speaks with journalists at the end of a press briefing on November 8, 2019 at the Zambian State House in Lusaka, Zambia. (SALIM DAWOOD / AFP)

The claims were made by the rebel chief, Callixte Nsabimana, who is on trial for terrorism and other charges. He has already admitted to working with other foreign governments against Rwanda.

During his latest hearing on Monday, Nsabimana told a Rwandan High court that Lungu had promised his National Liberation Front (FLN) $1 million to help oust the administration in Kigali.

He said Lungu had made a down payment of $150,000 in support of "rebel attacks to remove President Paul Kagame from power".

In a statement Tuesday the Zambian presidency said it "would like to categorically refute these claims".

It stated "unequivocally that these allegations are false and must be treated with the contempt they deserve".

"The governments and peoples of Zambia and Rwanda continue to enjoy strong and fraternal relations founded on mutual respect," said the statement from presidential spokesman Isaac Chipambe.

Nsabimana, also known as "Sankara" has in previous hearings named Burundi and Uganda as supporters of the rebel activities against Rwanda.

The rebel commander is charged with terrorism, treason, incitement violence, murder and kidnap among other charges.

Africa » Be a reporter: Write and send your article » Subscribe for news alert
Tags: Zambia, Rwanda