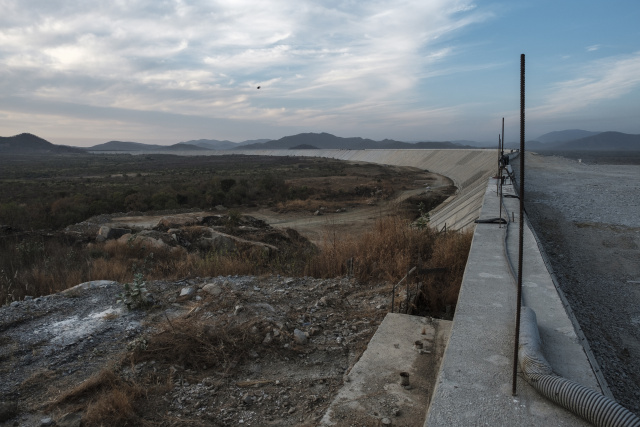 A general view of the Saddle Dam, part of the Grand Ethiopian Renaissance Dam (GERD), Ethiopia, near Guba in Ethiopia, on December 26, 2019. The Grand Ethiopian Renaissance Dam, a 145-metre-high, 1.8-kilometre-long concrete colossus is set to become the largest hydropower plant in Africa.
Across Ethiopia, poor farmers and rich businessmen alike eagerly await the more than 6,000 megawatts of electricity officials say it will ultimately provide.
Yet as thousands of workers toil day and night to finish the project, Ethiopian negotiators remain locked in talks over how the dam will affect downstream neighbours, principally Egypt. (EDUARDO SOTERAS / AFP)

("http://www.afp.com" class="source">AFP) - Ethiopia on Wednesday acknowledged that water levels behind its mega-dam on the Blue Nile River were increasing, though officials said this was a natural part of the construction process.

The Grand Ethiopian Renaissance Dam (GERD) has been a source of tension in the Nile River basin ever since Ethiopia broke ground on it in 2011, with downstream countries Egypt and Sudan worried it will restrict vital water supplies.

Addis Ababa has long intended to begin filling the dam's reservoir this month, in the middle of its rainy season, though it has not said exactly when.

Cairo and Khartoum are pushing for the three countries first to reach an agreement on how it will be operated.

"The GERD water filling is being done in line with the dam's natural construction process," Seleshi Bekele, Ethiopia's water minister, was quoted by state media as saying Wednesday.

He did not, however, say whether Ethiopia had taken steps to store the water in the reservoir, which has a capacity of 74 billion cubic metres.

"The government has not stated explicitly whether the water backing up behind the dam is due to the remaining outlets being closed, or whether it is simply water accumulating behind the almost complete structure during the rainy season," said William Davison, an analyst with International Crisis Group (ICG).

An official at the dam site told AFP this week that heavy rains meant the flow of the Blue Nile was exceeding the capacity of the dam's culverts to push water downstream.

"We didn't close and nothing is done. It looks like, when you see some photos, it looks like the river is getting higher and higher because of the amount of water coming from upstream, which is above the charging capacity of the culverts," said the official, who spoke on condition of anonymity.

A separate official, an adviser at the water ministry who also insisted on anonymity, stressed that water continued to flow downstream.

"As the construction progresses, the water level behind the dam also will rise, so that's what's happening, nothing more," said the adviser.

Ethiopia has long insisted it must start filling the dam's reservoir this year as part of the construction process, though filling will occur in stages.

Prime Minister Abiy Ahmed reiterated the point in an address to parliament earlier this month.

"If Ethiopia doesn't fill the dam, it means Ethiopia has agreed to demolish the dam," he said.

Seleshi's comments Wednesday triggered multiple reports, including from state-affiliated Fana Broadcasting Corporate, that Ethiopia had begun filling the dam's reservoir -- a move that would surely raise strong objections from Egypt and Sudan.

Sudan's irrigation ministry, meanwhile, said in a statement of its own that the country was experiencing "a retreat in the water levels, equivalent to 90 million cubic metres per day, confirming the closure of the GERD's gates".

The statement said Sudan rejected "any unilateral actions taken by any party" while negotiations continue.

Ethiopia, Egypt and Sudan are in the middle of trilateral talks overseen by the African Union (AU) to resolve the dispute over the dam.

Ethiopia issued a statement Tuesday night saying no major breakthroughs had occurred so far but that it expected the AU-led talks to continue.

An attempt earlier this year by the United States to broker a deal ended in failure, with Addis Ababa accusing Washington of favouring Cairo.

Davison of ICG said the issue of reservoir filling "should not distract Ethiopia, Sudan and Egypt from their essential task: to keep talking in order to find compromises on the outstanding areas of disagreement".