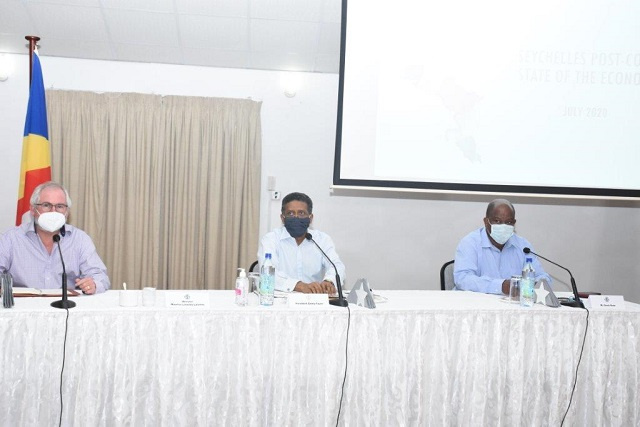 (Seychelles News Agency) - The economy of Seychelles will contract 10.8 percent in 2020 due to the tourism shutdown because of COVID-19, top officials said Thursday.

President Danny Faure chaired an in-depth presentation attended by journalists, an indication that leaders want to disseminate COVID-related economic information to the public.

With tourism -- the main pillar of Seychelles' economy -- having been severely affected, the country's economic growth, among other projections, are now expected to be negative.

Pre-COVID-19, the economic momentum of Seychelles was strong, as the country saw real GDP growth of 3.9 percent in 2019. In the same year, tourism receipts increased by 5.5 percent as compared to 2018.

"When we presented the 2020 budget in November 2019 before the National Assembly, we expected to continue with a good performance where we would have continued with a growth of 3.5 percent. Amidst COVID-19 there won't be a GDP growth of 3.5 percent that we had projected for 2020. We will record a decrease of 10.8 percent," said the finance principal secretary, Damien Thésée.

"We presented an amended budget where we have increased our expenditure by 1.2 billion rupees, hence having a fiscal deficit of 14 percent meaning we are spending more than we are generating for the year," continued Thésée.

He added that the government expected tourism to have a growth of 5 percent in general.

"Following the COVID-19 situation in March, we saw an effect on the arrival of tourists as compared to other years. In April and May, there were no tourists arriving in the country. The World Tourism Organisation (WTO) estimates that the arrival or tourist globally has reduced by 60 to 80 percent," said Thésée.

The governor of the Central Bank of Seychelles (CBS), Caroline Abel, outlined that at the moment, it is the fisheries industry that is sustaining the archipelago in the western Indian Ocean.

"One of the components that we have seen is the activities at IOT (Indian Ocean Tuna). We have seen overseas that people, going into lockdown were buying more canned food instead of fresh ones. This has been something positive for IOT. However, by the end of June we have seen that the fisheries industry too can be affected," said Abel.

This came as after seafarers from West Africa tested positive for COVID-19 a day after they joined their crew on a Spanish fishing fleet operating in the waters of Seychelles. The Department of Health said that the remaining active cases among the seafarers on Tuesday were 67.

Thésée presented the programmes in place aimed at mitigating the adverse effects of COVID-19 on the private sector and the general population.

A provision of SCR1.2 billion ($68 million) has been made as a wage grant to assist businesses in the private sector towards payments of staff salaries to ensure no redundancies during the month of April, May and June. A private sector relief loan was also introduced. The social protection budget was also increased by SCR40 million ($2.2 million).

Tax returns which were due by March 2020 from the private sector have been extended to September 2020.

"In general, we will have a financing gap of 3.7 billion rupees ($209 million) this year as we are not producing this revenue to finance our different programmes. We are financing this through the issuing of a Solidarity Bond for a value of 1.5 billion rupees ($85 million), through assistance by different international financial institutions for a total sum of $70 million and through the Central Bank of Seychelles advance facility of 500 million rupees," said Thésée.