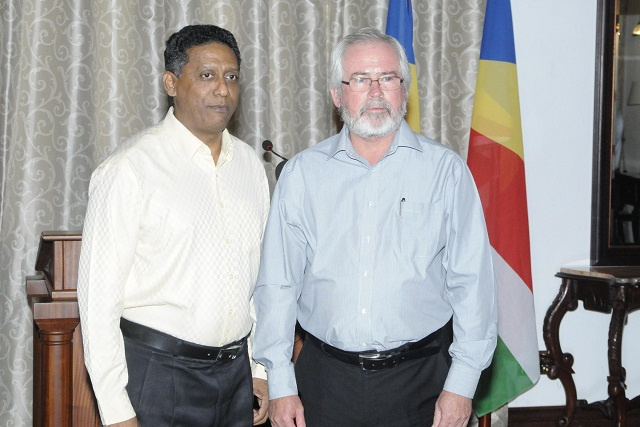 In a press communique on Thursday, the President's party, United Seychelles, said that the nomination was announced in a meeting of the executive committee.

Loustau-Lalanne, 65, is presently the Minister of Finance, Trade, Investment and Economic Planning in Faure's Cabinet of Ministers.

When addressing the committee Faure gave the reasons why he chose Loustau-Lalanne to stand at his side after he called for a government of national unity in the next elections to face the great challenge that Seychelles is facing.

The nomination of Loustau-Lalanne will be presented at the congress of United Seychelles on Aug. 1. Provisional dates for the presidential elections have been set for October 22-24 by the Electoral Commission.

According to the communique, Faure described Loustau-Lalanne as "a distinguished public servant with many experiences and who has served the government for several decades in several capacities."

Faure said that Loustau-Lalanne is well respected not only in the public service but also in the private sector and by political forces and civil society.

Loustau-Lalanne started his career in civil aviation and played a key role in the development of that sector and in the creation of the Seychelles' national carrier, Air Seychelles, and became the chief executive.

He also contributed enormously in the tourism sector where he was the principal secretary and then became the chairman and chief executive of the first tourism board.

Loustau-Lalanne has occupied several other high level posts namely Principal Secretary in the Ministry of Foreign Affairs and the post of Minister for the portfolio of tourism, civil aviation, ports and marine.

Politics » Be a reporter: Write and send your article » Subscribe for news alert
Tags: Cabinet of Ministers, United Seychelles