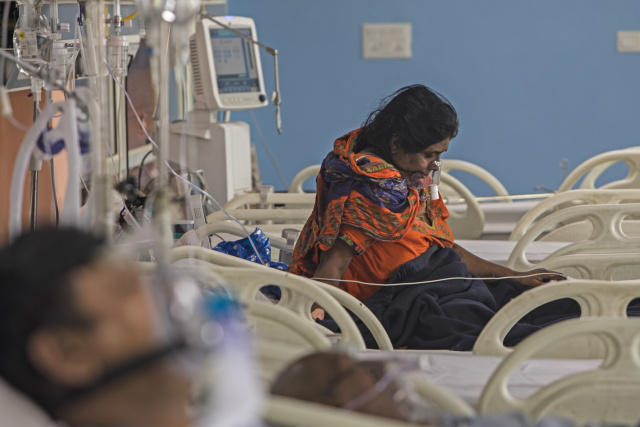 In this photograph taken on July 15, 2020 a COVID-19 coronavirus patient sits on a bed at the Intensive Care Unit of the Sharda Hospital, in Greater Noida. Coronavirus cases in India passed one million on July 17, official data showed as authorities struggle to check the spread of the deadly pandemic across the world's second-most populous nation. (XAVIER GALIANA / AFP)

(AFP) - Coronavirus cases in India passed one million on Friday, official data showed as authorities struggle to check the spread of the deadly pandemic across the world's second-most populous nation.

With over 600 Indians dying daily, lockdowns are being re-imposed across the country of 1.3 billion following an easing of restrictions in recent weeks on hopes the outbreak was under control.

India, home to some of the planet's most densely packed cities, is the third nation to hit a million cases after the United States and Brazil, although the numbers of deaths in those two countries are far higher.

The International Federation of Red Cross and Red Crescent Societies said Thursday that India, Pakistan and Bangladesh are together fast becoming the next epicentre of the virus.

"While the world's attention has been focused on the unfolding crisis in the United States and South America, a concurrent human tragedy is fast emerging in South Asia," the organisation said.

"COVID-19 is spreading at an alarming rate in South Asia, home to a quarter of humanity."

Until now India's main hotspots have been the megacities of Mumbai and New Delhi, but recently smaller cities and rural areas -- where 70 percent of Indians live -- have begun to raise the alarm.

Goa on Thursday evening became the latest state to go under lockdown, imposing a three-day shutdown and a nightime curfew until August 10.

Chief Minister Pramod Sawant said too many people were "stepping out to meet people at parties" and there was a low level of "awareness and sensitivity".

The coastal tourist region followed Bihar, one of India's most impoverished states and home to 125 million people, in reintroducing curbs after IT hub Bangalore did so earlier in the week.

Other areas have also brought back restrictions including parts of badly-hit Tamil Nadu and Kerala -- previously lauded as a success story -- as well as Assam.

But the situation on the ground in Bihar underscored the challenges in keeping the pandemic in check.

The streets of state capital Patna were still teeming with traffic and people after the lockdown began, many ignoring social distancing advice and not wearing masks.

"The lockdown is not being fully enforced," local businessman Ranjeet Singh complained.

With per capita spending on health care among the lowest in the world, India's hospitals are reeling.

"COVID patients often get delirious. They refuse to eat, pull away their tubes and even get violent with us," Showkat Nazir Wani, a doctor at one hospital in Uttar Pradesh state told AFP.

Many experts say India is not testing enough people or properly recording fatalities, meaning the true caseload is likely much higher.

The tally is "almost certainly underestimated", Gautam Menon, a professor of physics and biology at India's Ashoka University, told AFP.

"We feel it might be underestimated by a factor of maybe something like 20 to 30... And maybe that number could be even larger. We have no idea at the moment."