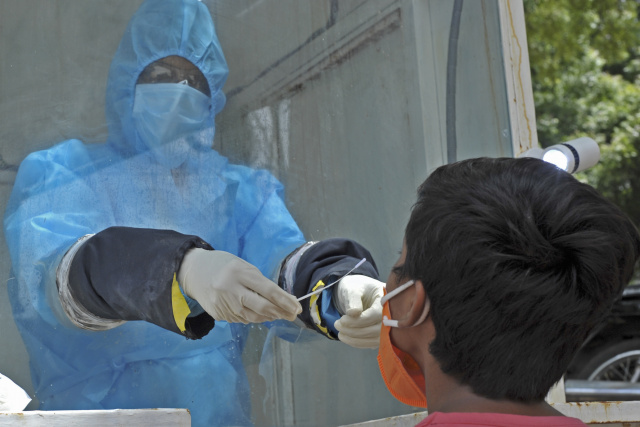 A health worker wearing Personal Protective Equipment (PPE) gear collects a swab sample of a boy at a government free testing centre in Hyderabad on July 17, 2020. Coronavirus cases in India passed one million on July 17, official data showed as authorities struggle to check the spread of the deadly pandemic across the world's second-most populous nation. (NOAH SEELAM / AFP)

(AFP) - The United Nations is seeking an additional $3.6 billion for its Global Humanitarian Response Plan to battle the pandemic, warning developed countries on Thursday of "the price of inaction" if poorer nations don't receive help.

"There is a serious risk of multiple famines later this year and early next year. We need to invest now to prevent that," Mark Lowcock, the UN under secretary-general for humanitarian affairs, told a news conference.

In addition to Somalia, South Sudan, Yemen and Nigeria, which have already been hit by food shortages, he expressed growing concern over Sudan, Zimbabwe and Haiti.

As well as combating famines accentuated by the pandemic-induced economic crisis, the additional funds would pay for medical equipment, information campaigns and establish humanitarian air bridges in Africa, Asia and Latin America.

"The response so far of wealthy nations ... to situations in other countries has been grossly inadequate," said Lowcock.

"The massive problems the world faces can be addressed with relatively little money and a lot of imagination."

It was the third appeal for donations from the UN since it launched the plan in March, when it was looking for $2 billion. The new request brings the total wanted to $10.3 billion.

Since March, only $1.7 billion has been donated.

Lowcock spoke of discussions in the US Congress and the European Union, and deplored the fact that aid from Gulf countries was long overdue.

"We do want see these countries get back to play the role they had played in the previous two or three years," he said, highlighting the "risk of significant reduction in UK assistance."

China has recently pledged to spend two billion dollars on poorer countries and it would be good if "some significant proportion of those resources could be used directly to support" the UN plan, he said.

According to a projection by the UN and the University of Oxford, 121 million more people could be affected by food insecurity by December if nothing is done.

Failure to act could also lead to instability or conflict in countries such as Lebanon, Senegal, Belize, Zambia, Zimbabwe and Burundi, according to the United Nations.

In poor countries, the human cost could be devastating if the virus is not brought under control. It could kill 1.67 million people in 30 low-income countries, according to UN projections.