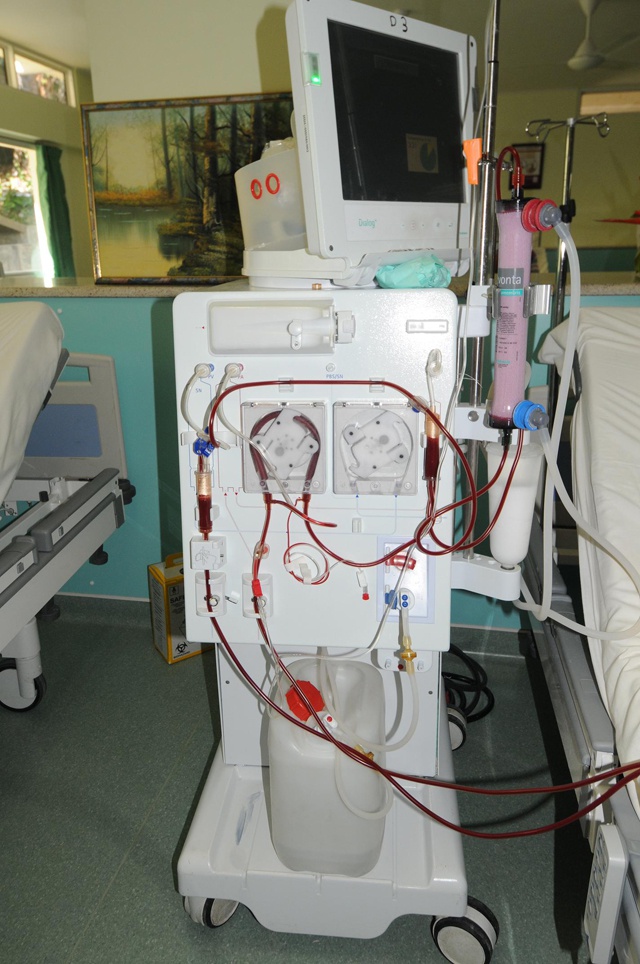 One of the twenty state of the art dialysis machine fitted in the new hemodialysis centre at the Seychelles Hospital (Joena Bonnelame, Seychelles News Agency)

(Seychelles News Agency) - The Seychelles Ministry of Health has over the past two decades recorded an increase in the number of Seychellois patients suffering from kidney failure thus requiring regular treatment.

From just four patients in 1990 the figure rose to 100 in 2013. Since January this year, the Ministry of Health has recorded 17 new cases of people suffering from kidney failure, a condition which is largely linked to diabetes and hypertension.

In 2004, a survey found that 11 percent of the Seychelles adult population suffered from diabetes. The results of another survey carried out last year, have not yet been released, but it is very likely that diabetes prevalence has increased significantly.

In order to better cope with the increase in patients needing regular treatment, the Seychelles Hospital at Mont Fleuri, central district of the archipelago’s main island of Mahé, has got a new hemodialysis centre, which offers a range of facilities for patients with chronic or acute kidney failure.

In the early 1990’s the archipelago's Ministry of Health had to send patients with kidney failure to Reunion, the French overseas department in the Indian Ocean for a two year period for treatment something which the Centre's Nurse Manager, Elsie Sinon said constituted a financial burden for both the Health Ministry and relatives.

Seychelles got its first nephrologist in 1994, Dr Tony Wong, when eight dialysis machines were also imported, at the time sufficient to cater for the number of patients needing treatment.

With the new facility, the dialysis treatment capacity at Seychelles hospital has more than doubled as the addition of new dialysis machines allows the centre to cater for 24 patients when fully operational. The Deputy Chief Executive Officer of the archipelago’s Health Care Agency, Dr Danny Louange said this will allow patients to be treated in less crowded conditions.

He noted that patients can now be treated in three 4-hour sessions per day and do not have to remain in hospital until midnight, as was previously the case.

One 53 year old man from Port Glaud, western district of the Seychelles main island of Mahe, who was amongst nineteen patients undergoing treatment at the centre this morning told SNA he has been receiving dialysis treatment since four years. He said that after suffering from loss of appetite and shaking, he consulted a doctor working in the private practice who after a series of tests, certified he was suffering from renal insufficiency and was admitted for dialysis treatment.

Dorothy Serret, a nurse working at the new haemodialysis centre explained to SNA that Reverse Osmosis constitutes an important part of the treatment. It involves refining the water to be used of all chlorine, lead, copper and other minerals, which can otherwise have an adverse effect on the patient.

The pure water is then connected for mixing with concentrate acids, bicarbonate and dialysate bath used for dialysis. An artery and vein are selected by the doctor for the "arterio-venus fistula" needle and dirty blood is extracted by a dialyser, performing the function of an artificial kidney. While removing the toxins, care is also taken to avoid any "air traps" or clots.

This is done very slowly and the cleaned blood is injected into the body by a different tube.

"We have the first session at 10am, another starting at 1pm and a third towards 5 pm," said Serret, adding that sessions are carried out three days a week.

Louange told the press that it cost about $ 190 per patient for each session.

"That is why consumables cost over $ 1.3 million. It is for products used in the dialysis, drips, plastic tubes, which all have to be thrown away after each session."

He added that the shelf-life of a dialysis machine ranges between eight to ten years, depending on how well-maintained it is.

Commenting on the prevalence of diabetes and hypertension in Seychelles, the main causes of kidney failure, Louange, while admitting that they are in some cases hereditary, blames the lifestyle which people choose to adopt.

"There are unhealthy eating habits, such as abuse of carbohydrates and sweet foods, which cause the sugar level to go up. There is also a tendency to consume more fast foods with high contents of preservatives. And for many people, there is abuse of alcohol, which affects the vital organs."

The Seychelles government has spent some $ 2.7 million to refurbish the former psychiatric unit at the Seychelles hospital and turn it into a new and much larger hemodialysis centre, together with the purchase of additional dialysis machines.

Seychelles at 250: the history of epidemics and the island nation