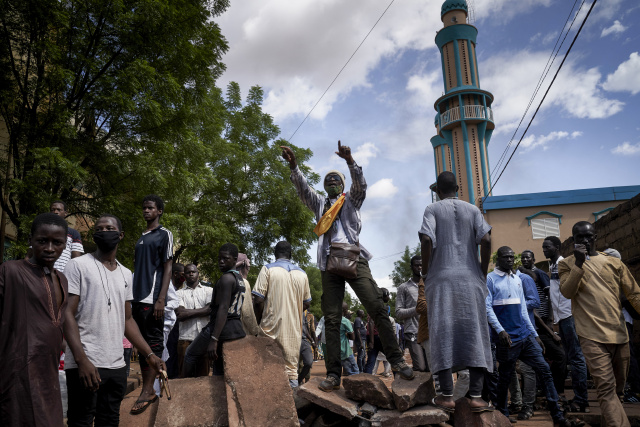 Protesters gestures on a barricade put up in front of the Salam mosque of Badalabougou, where the influent Imam Mahmoud Dicko led a prayer dedicated to the victims of the clashes of the past two days in Bamako on July 12, 2020. Mahmoud Dicko, an influential Malian imam and the head of an opposition coalition leading protests across the West African country, called for calm on July 12, 2020, after two days of deadly unrest. (MICHELE CATTANI / AFP)

(AFP) - West African mediators proposed a route out of Mali's political crisis on Sunday, but admitted the opposition's main demand was a significant stumbling block.

"We met with the M5 four times and we couldn’t resolve our differences," he said, referring to the opposition June 5 Movement.

"ECOWAS cannot come to Bamako and see to the setting up of an interim government," he added, explaining that this would trigger a "major crisis".

"We have to take one step at a time."

President Keita and the June 5 Movement -- which is set on his resignation -- are locked in a political standoff that last week spiralled into violent clashes, leaving 11 dead.

On Sunday, the mediators from the 15-nation Economic Community of West African States (ECOWAS) capped days of talks between the parties and proposed a raft of measures to soothe soaring tensions.

These included forming a new power-sharing government under which 50 percent of members would be from the ruling coalition, 30 percent from the opposition and 20 percent from civil society groups.

But the prospect of the proposals ending the impasse looked highly uncertain.

The June 5 Movement had already spurned proposals put to them by the mediators on Friday, after days of talks, insisting that Keita must resign.

The opposition alliance has been tapping into deep-seated frustrations in Mali over the 75-year-old president's perceived failures in tackling the dire economy, corruption and the country's eight-year-long jihadist conflict.

Many Malians are also incensed at the outcome of long-delayed parliamentary elections in March and April that handed victory to Keita's party.

AFP was unable to immediately reach either Mali's government or the June 5 Movement for comment.

Mali's current crisis has concerned its allies and neighbours, who are anxious to avoid the poor, war-torn state sliding into chaos.

Swathes of the country lie outside of government control because of a jihadist insurgency that began in the north in 2012, and has since claimed thousands of lives and driven hundreds of thousands from their homes.

Fighting has also spread to neighbouring Burkina Faso and Niger.

Keita, who first came to power in 2013 on hopes of change, has been under increasing pressure to resolve the conflict.

But much of the current tension in Mali was sparked in April, when the constitutional court tossed out 31 results from the parliamentary elections, which led to protests.

The June 5 Movement then emerged -- channelling anger over a range of issues -- and staged two mass rallies demanding Keita's resignation last month, before organising the July 10 rally which turned violent.

The movement is an alliance of political, social and civil-society leaders gathered around powerful imam Mahmoud Dicko, who is seen as its de facto leader despite not being a formal member.

On Sunday, ECOWAS mediators suggested appointing new judges to the country's constitutional court so that they could revisit the decision on the disputed seats.

Their proposals were substantially similar to conciliatory gestures unsuccessfully floated by Keita himself in a bid to soothe anger, but rejected by the opposition.

Jean-Claude Kassi Brou, a member of the ECOWAS mediation team, suggested there was room for progress despite opposition hostility, however.

"Dialogue is not over," he said. "I can tell you that imam Mahmoud Dicko accepts the broad outlines of our recommendations."

AFP was unable to immediately reach Dicko for comment.

Speaking to reporters on Sunday, Jonathan suggested that Malians unhappy with Keita should focus on the next presidential election.

"In most countries, when the president is on his second term, nobody thinks about that president again," he said.