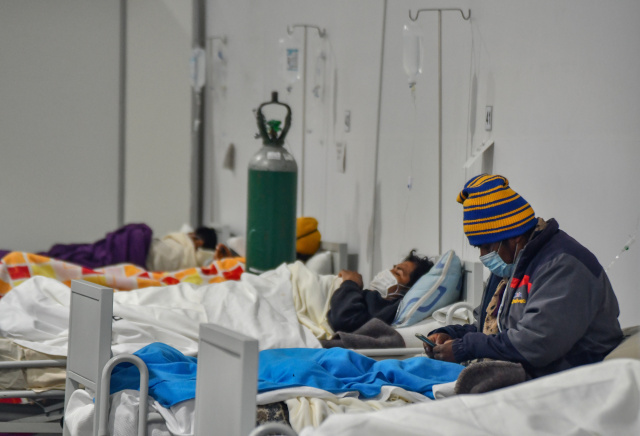 Patients infected with COVID-19 receive attention at the triage area, in the regional Honorio Delgado Hospital in the Andean city of Arequipa, southern Peru on July 23, 2020. The government issued an emergency decree allowing the Ministry of Health to intervene to mitigate the crisis situation caused by the increase in COVID-19 infections and victims. Peru exceeded 17,000 deaths from the coronavirus on Wednesday, adding 188 new cases and adding 3,688 deaths between March and June that had not been officially counted by health authorities, the government reported. (Diego RAMOS / AFP)

While EU lawmakers combed through a huge aid package for their economies, the UN called for a basic income for the world's poorest to help slow the spread of COVID-19, and the Red Cross warned of "massive" new migration caused by the economic devastation.

The United States, the hardest-hit country by the virus, added one million new cases in just over two weeks, according to a tracker maintained by Johns Hopkins University. In the previous 24 hours alone, the country notched more than 76,000 new cases.

Having recorded more than 144,000 total fatalities, the United States has seen a coronavirus surge, particularly in southern and western states, as Texas, California, Alabama, Idaho and Florida all announced record one-day death tolls.

Nevertheless, the rate of new cases is now showing signs of easing off in some of the worst-hit zones.

Against a backdrop of mass unemployment and sagging approval ratings, President Donald Trump announced he was scrapping next month's Republican nominating convention in Florida, stating that it was not the right time to hold a "big, crowded" event.

Meanwhile, the European continent now accounts for a fifth of the world's more than 15 million cases and remains the hardest hit in terms of deaths, with 206,633 out of 627,307 worldwide.

A 750-billion-euro post-coronavirus recovery plan was hammered out at an EU summit this week, where fiscally rigid nations butted heads with hard-hit countries like Spain and Italy that have called for huge aid grants.

"This moment, it's my conviction, is pivotal in European history. We acted fast and with urgency," Michel told the bloc's parliament in Brussels.

"Europe's response is greater than that of the United States or China," he said.

Funding of $199 billion per month would provide 2.7 billion people with a temporary basic income and the "means to buy food and pay for health and education expenses," the UN Development Programme said.

UN projections have warned the virus could kill 1.67 million people in 30 low-income countries.

"Many people who are losing livelihoods, once the borders start opening, will feel compelled to move," he told AFP.

"We should not be surprised if there is a massive impact on migration in the coming months and years."

There were signs the virus can quickly re-emerge when lockdown measures are lifted.

Australia, Belgium, Hong Kong and the Japanese capital Tokyo all had early successes in containing outbreaks but are now facing an upsurge, prompting new restrictions.

Anyone venturing out in Australia's second-biggest city Melbourne will have to wear a mask. The same will be true in Belgium's outdoor markets and busy areas from Saturday.

"These measures are not advice, they are orders," Belgian Prime Minister Sophie Wilmes said.

The politics around the virus continued, with WHO chief Tedros Adhanom Ghebreyesus rejecting an allegation by US Secretary of State Mike Pompeo that he owed his position to a deal with China.

Tedros said the claim was "untrue and unacceptable" and warned against the "politicization of the pandemic."

Meanwhile, in France, while the number of foreign tourists in Paris -- the world's most visited city -- has dwindled during a two-month lockdown, there has been a noticeable increase in home-grown visitors.

"Most clients are clearly French, with lots of families," said a spokesman for catering firm Sodexo, adding that the chic Jules Verne restaurant on the Eiffel tower was booked solid every night in July.