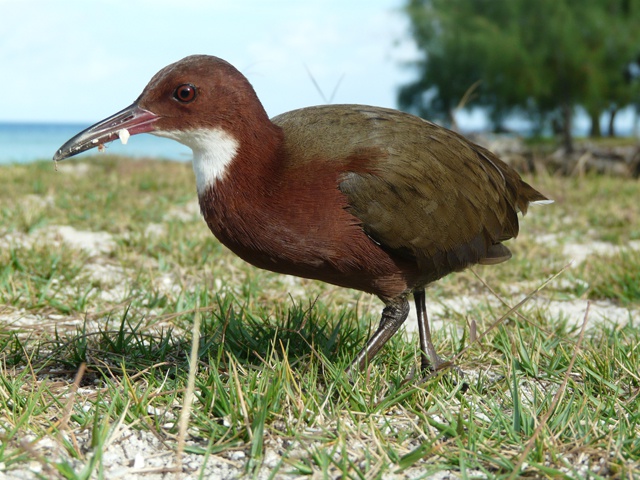 (Seychelles News Agency) - A researcher at the Seychelles Islands Foundation (SIF), Dr Janske van de Crommenacker is hard at work in her efforts to prove that the Aldabra rail (Dryolimnas cuvieri aldabranus) is a separate species of bird endemic to the Aldabra atoll in the Seychelles archipelago of 115 islands.

The Aldabra rail, currently classified as a sub-species of the white-throated rail found elsewhere in the Comoros, Madagascar and Mayotte, but the Aldabra rail, unlike its counterparts, is a flightless bird. Moreover, it has the distinction of being the only flightless bird remaining in the Indian Ocean, after the extinction of its distant relatives, the Mauritian dodo and the Rodrigues solitaire.

Not willing for the Aldabra rail to go the same way as its late counterparts, the Dutch-born SIF researcher is hard at work analysing the DNA of the three white-throated rail sub-species to justify its reclassification as a separate species.

According to the September issue of the SIF newsletter, Dr van de Crommenacker has already extracted DNA from museum specimens of the three rail sub-species; Aldabra Rails, Assumption Rails (which have since been declared extinct) and Madagascar Rails. Many of the samples, which were supplied by the Natural History Museum of London in Tring, are fromspecimens preserved over 100 years ago.

The biologist had to extract a tiny piece of tissue cut from the toe-pad of the preserved birds, and due to the specimens’ age and preservation technique, the process of extracting usable DNA from the samples proved to be difficult but the preliminary results already look “promising”, according to the SIF.

Dr van de Crommenacker believes that the Aldabra rail’s appearance and behaviour are different from the white-throated rails on Madagascar, from which the Aldabra rail was thought to have branched off and developed its own unique characteristics.

The SIF is of the view that confirming the Aldabra rail as a separate species would go a long way towards protecting and conserving the birds in their natural habitat, the unique and isolated UNESCO World Heritage Site of Aldabra, which is home to 150,000 giant Aldabra tortoises and many other endemic species of birds, reptiles, plants and insects.

Dr van de Crommenacker’s next task will be to amplify a selection of DNA regions from her samples to construct phylogenetic trees and assess the genetic differences between the three sub-species. She will then compare the DNA sequences of the Dryolimnas rail samples with other relatives elsewhere in the world, both close and distant, by using the public GenBank database.

Aldabra rails also became extinct on the island of Picard within the Aldabra atoll due to the introduction of domesticated cats. Although the birds were re-introduced to Picard in 2002 from the other Aldabra islands of Polymnie, Malabar and Ile aux Cedres after the eradication of cats on Picard, Dr van de Crommenacker has also obtained specimens of the extinct birds from the Natural History Museum in New York to examine whether there were any fine-scale genetic differences between the Aldabra rails living on different islands.

This would ensure that should any genetic differences exist, the SIF can conserve and manage them effectively.