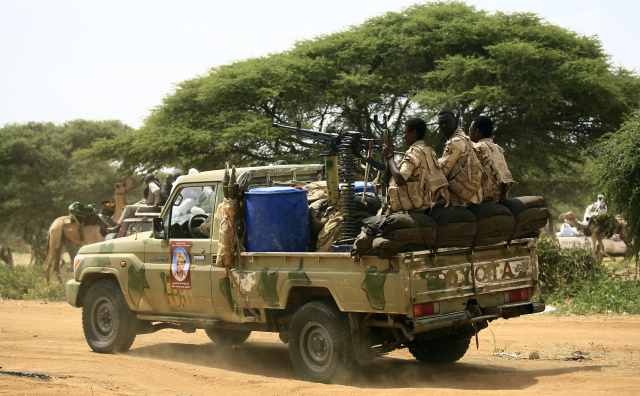 Sudanese members of the Rapid Support Forces, a paramilitary force backed by the Sudanese government to fight rebels and guard the Sudan-Libya border, ride in the back of a Toyota pickup truck as they prepare to receive President Omar al-Bashir during his visit to the town of Umm al-Qura, northwest of Nyala in South Darfur province, on September 23, 2017. Bashir, wanted by the International Criminal Court on charges of genocide and war crimes related to the conflict in Darfur, is touring the region ahead of a US decision to be made on October 12, 2017 on whether to permanently lift a decades-old trade embargo on Sudan. (ASHRAF SHAZLY / AFP)

(AFP) - UN officials on Sunday reported a fresh massacre of more than 60 people in Sudan's West Darfur, as the country's prime minister promised fresh troops for the conflict-stricken region.

Attackers targeted members of the local Masalit community, looting and burning houses and part of the local market, a statement said.

Around 500 armed men attacked Masteri Town, north of Beida, in Darfur on Saturday afternoon, said the statement from the UN Office for the Coordination of Humanitarian Affairs (OCHA).

"This was one of the latest of a series of security incidents reported over the last week that left several villages and houses burned, markets and shops looted, and infrastructure damaged," said the statement, from the OCHA's Khartoum office.

On Sunday, Prime Minister Abdalla Hamdok said the government would send security forces to conflict-stricken Darfur to "protect citizens and the farming season".

"A joint security force will be deployed in the five states of the Darfur region to protect citizens during the farming season," Hamdok's office said in a statement after he met a delegation of women from the region.

The force will include army and police forces, it said.

On Friday, armed men drove into a village and killed 20 civilians returning to their fields for the first time in years, an eyewitness and a tribal chief told AFP.

The impoverished western region has seen years of conflict since an ethnic minority uprising prompted the government to launch a scorched-earth campaign that left 300,000 people dead and displaced 2.5 million.

The government and a coalition of nine rebel groups, including factions from the region, signed a preliminary peace deal in January.

Farmers displaced in the conflict had since started to return to their land under a government-sponsored deal reached two months ago, in time for the July-November planting season.

But the bloodshed has continued, particularly over land rights, according to expert Adam Mohammad.

"The question of land is one cause of the conflict," he said.

"During the war, peasants fled their lands and villages to camps, and nomads replaced them and settled there."

The recent killings have targeted the African farming communities in conflict with the nomadic Arab tribes over the land.

In late June and early July, hundreds of protesters camped for days outside a government building in the Central Darfur town of Nertiti to demand that the government beef up security after multiple killings and looting incidents on farmland and properties.

After Saturday's attack on Masteri, around 500 local people staged their own protest demanding more protection.

"The escalation of violence in different parts of Darfur region is leading to increased displacement, compromising the agricultural season, causing loss of lives and livelihoods and driving growing humanitarian needs," said the OCHA statement.

Bashir is wanted by the International Criminal Court over charges of genocide and crimes against humanity in the conflict.