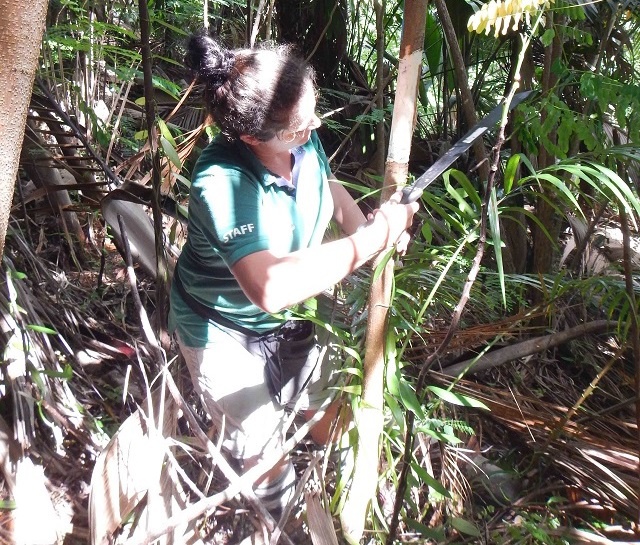 Several introduced tree species have already been brought under control as part of a project being undertaken by the SIF to rid Praslin's UNESCO world Heritage site of Vallee de Mai, of invasive alien species. (Lucia Latorre)

(Seychelles News Agency) - Four months ago, a team of workers from the Seychelles Islands Foundation (SIF) began the arduous task of managing and clearing the UNESCO World Heritage Site of Vallée de Mai of invasive alien plants, and it seems that despite the difficulties, the fight to protect rare indigenous species in the park is making great headway.

Nestled in the heart of the Seychelles’ second-largest island of Praslin, the Vallée de Mai is a reserve that is home to the famous coco de mer, an endangered palm that produces the largest nut in the plant kingdom. The size and suggestive form of the nut has given rise to many legends.

Centuries before the Seychelles was inhabited by settlers, the falling nuts would sometimes get washed out to sea and carried away by the ocean’s currents. In this way, some drifted to the neighbouring islands of the Maldives, and until the true source of the nut was discovered in 1768, it was widely believed to grow on a mythical tree at the bottom of the sea.

The palm forest of the Vallée de Mai is also home to the endemic but elusive black parrot and several species of endemic reptiles and molluscs which depend on endemic trees for their continued survival.

"We have classified the invasive species according to their ranking in the world. We also tried to assess how invasive they are and most importantly how widespread they are in this protected area," S.I.F’s coordinator for the invasive alien species project on Praslin, Lucia Latorre told SNA in an interview.

According to Latorre, cinnamon tops the list of the most invasive species, followed by albizia, Lagati and Kalis Dipap.

"There are also creepers such as filo Dendron that we need to alienate in the near future as they can be a very invasive species that can attack and killed endemic plants quickly," she added.

Through the project, several of these species have already been eradicated including an impressive 644 out of 745 Lagati trees which were successfully ring-barked by the end of August.

"The remaining trees are being earmarked for controlled felling or lopping due to their proximity to footpaths and roads," said Latorre.

Ring-barking, or girdling, is a process whereby a strip of bark is removed around the entire circumference of the tree trunk that leads to the eventual demise of the tree.

Lucia Latorre explained that the ring barking system have been used successfully on Mahé in the past and it is a method that is tested and monitored before being applied on the invasive species.

About two months after the ring-barking procedure is performed, the team monitors the trees to ensure the effectiveness of the procedure, with mixed results.

The effects of the ring-barking are most prominent on the Lagati trees, which show the highest loss of leaves, mortality rate and unhealthy appearance, but the Lagati trees also seem to be showing fast healing, with more than 20 percent of the trees showing bark regrowth or re-sprouting.

However, although the Jackfruit trees appear to be weakening, the team noticed mass fruiting in some of the trees – perhaps a survival instinct to try to re-seed itself before it dies. Somewhat frustratingly, all the Bwa Zonn trees still seem to be healthy.

The next task on the invasive species control team is the control of the Kalis Dipap trees, which number over 800 in the palm forest.

“The team is ring-barking an impressive 20–30 trees per day, which equates to 100 to 200 trees per week,” reports the SIF September newsletter. “Around 300 Kalis Dipap trees have been treated so far.”

The team will be continuing to control Kalis Dipap and simultaneously check the effects of control methods on all other species.

"This is a management and a trial project which will be available for everyone to use as reference in the future," said Latorre.

The project which is also being implemented on Aldabra, another UNESCO World Heritage site that is being managed by SIF, will end in early 2015.