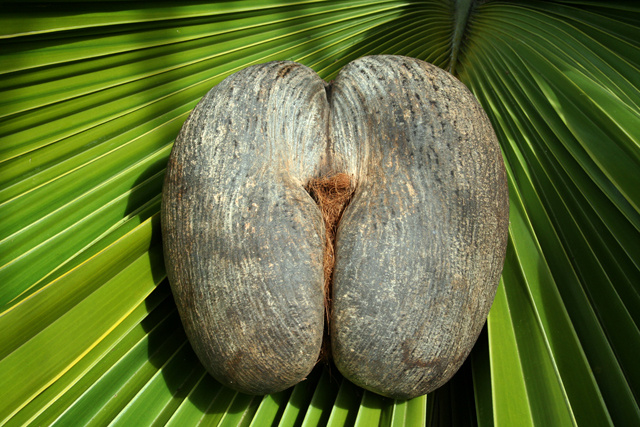 (Seychelles News Agency) - Scientists from the Royal Botanic Gardens, Kew have conducted a new study that is providing an understanding of what might have led to the extreme size of the Seychelles' coco de mer seed and its related palm trees.

A researcher at the Garden, Sidonie Bellot, and leader of the study told SNA that several conditions had to be met to allow the big size of the coco de mer seed to exist.

"The first condition to be met was overall structure. Plants had to be large with few-branched inflorescences (the flowering stem) to physically allow for large seeds," said Bellot.

A second condition was the existence of shady habitats and the presence of large seed-dispersing animals.

"It was advantageous for plants to have large seeds as they contained resources to sustain seedling growth until they reached the light of the canopy and/or there were animals large enough to be able to disperse them," she added.

She said another condition is a subsequent lack of dispersal agent and that "without dispersers, it was advantageous to have fewer seeds to minimise plant competition under the 'mother tree'. And because fewer seeds were produced, they could be even larger."

Bellot said the study concluded that the coco de mer is closely related to the palmyra palms, Doum palms and Latan palms, which all have large seeds.

Frauke Fleischer-Dogley, the chief executive of the SIF, said the most important take away message in the study is that the managers of natural resources only effectively protect these if "we allow for a continuation of evolutionary and ecological process."

The study which started in 2017 was based and supported by data that have been generated during many years.