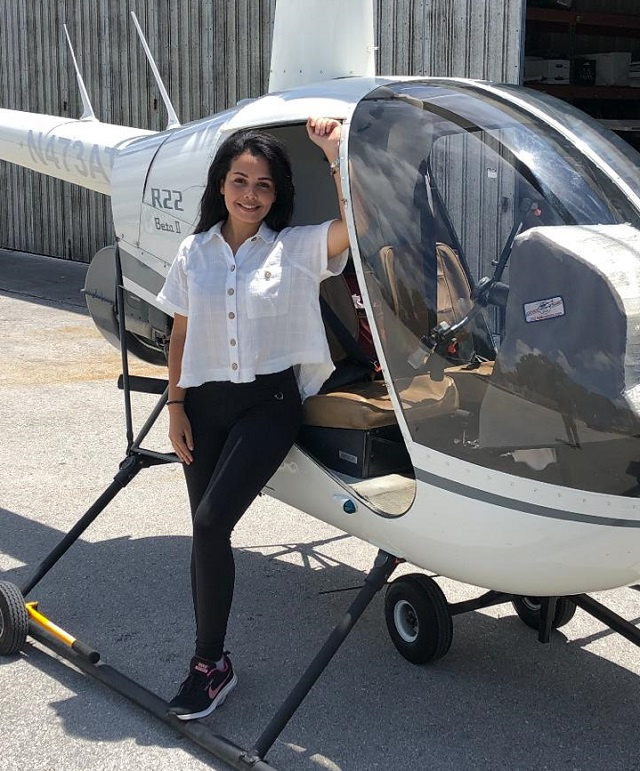 Gendron is working for Zil Air, a provider of helicopter and fixed wing aerial limo services in Seychelles. (Vanessa Gendron)

Vanessa Gendron, a 27-year-old Seychellois, graduated on July 18 as a commercial helicopter pilot from Palm Beach Helicopters, a helicopter flight-training academy in the United States.

Gendron is working for Zil Air, a provider of helicopter and fixed wing aerial limo services in Seychelles, a group of 115 islands in the western Indian Ocean.

"It is certainly a great achievement, bringing a sense of local pride from the female community to Zil Air, and that in itself is my greatest delight," said Gendron.

Zil Air's executive director, Francis Savy, told SNA that "at least once a year, we part-finance a young Seychellois to follow this helicopter training course that costs around SCR1.5 million ($85,000) per candidate. It is part of our mid- to long-term plan to localise our posts, while at the same time ensuring that our personnel have the required experience."

He said that the training is part of an ongoing programme with the Agency for National Human Resource Development.

Gendron is the second candidate to complete the course and Zil Air had planned to send a third candidate in September but was forced to postpone to next year due to the COVID pandemic.

When Gendron returns to Seychelles, she will be carrying out local operations such as transfers to different islands and scenic tours.

"For the next six months or so she will receive further training alongside other pilots, preparing her for her solo flights," said Savy.

Gendron told SNA via Whatsapp that she has always wanted to be a pilot even though she didn't have any aviation influence in her life.

"Flying was just one of those dreams I never thought would become a reality. For a long time, that dream seemed unreachable and I felt that I simply couldn't achieve it, so I just proceeded on with my life. However, this is a negative mindset a lot of us have - that we are not worthy of something," she said.

After asking herself where she wanted to be in five years' time, Gendron said she decided to do something about it now or have regrets for what could have been.

"From then on, I started working towards what I wanted to be and did better, even though it hasn't been an easy road," she added.

Gendron, who has a six-year-old daughter, said the biggest challenge was having to leave her behind but learnt to turn pain into determination she needed to successfully complete her course in less than nine months.

"The course in itself was tough but indeed amazing. I wouldn't change a thing as everything was a lesson I needed to learn in aviation," she told SNA.

Gendron started working for Zil Air in October 2018 and had to undergo three months of intense training in the Seychelles People Defence Forces (SPDF) to become army personnel.

"Being a strong-willed individual has guided me through to breaking the stigma of gender inequality and female empowerment required to take on such jobs deemed better for men than women," said Gendron, who is looking forward to flying the skies of Seychelles.