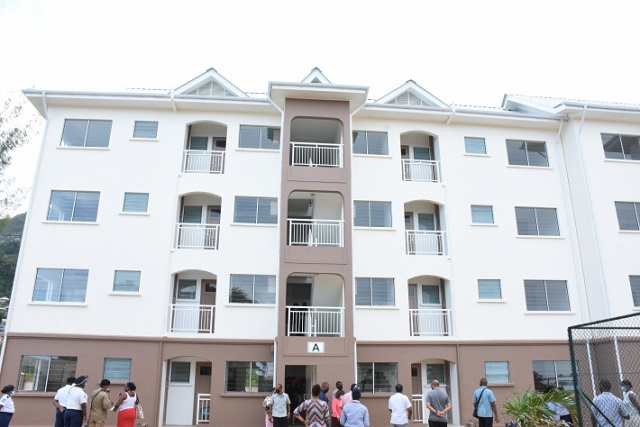 Another housing project comprising of 16 units in the central district of Roche Caiman was allocated on Friday bringing the total to 14. (Thomas Meriton)

(Seychelles News Agency) - The government of Seychelles has completed and allocated 14 housing projects under the 24-24-24 project -- 24 houses in 24 districts in 24 months -- launched in 2017, said a government official.

The ambitious government-funded housing project was announced by President Danny Faure in his 2017 State of the Nation address to alleviate the housing problems in the country.

Housing remains a major social issue in the island nation with a population of approximately 95,000 people. At the end of last year, there were around 3,000 applications for social housing.

The principal secretary for infrastructure, Benjamin Choppy, told SNA last week that despite delays with the 24-24-24 plan, the housing ministry was satisfied with the progress made as more than half of the projects have been delivered as at July 2020.

"Altogether we have allocated 326 units out of 575 that we have planned to build under the 24-24-24 project, which represents 13 housing projects," said Choppy.

Another housing project comprising of 16 units in the central district of Roche Caiman was allocated on Friday bringing the total to 14. A project in the southern Mahe district of Takamaka is almost completed and will be allocated in September.

Construction work is almost completed in two other districts -- Anse Aux Pins and Pointe Larue -- and allocation is expected to be done by September.

The 24-24-24 project was expected to be delivered within two years but encountered delays and challenges.

"Some sites had sitting tenants, so we had to build by phases. Also, we had not secured land in some districts when the project was announced and negotiations to get the land earmarked for other projects took some time, which delayed the construction," explained Choppy.

Apart from social housing, the government of Seychelles, an archipelago in the western Indian Ocean, has set up other housing schemes to assist the population based on their financial ability. These include self-financing schemes and condominiums for the upscale market.

General » Be a reporter: Write and send your article » Subscribe for news alert
Tags: 24-24-24 project, State of the Nation Address, self-financing schemes, condominiums