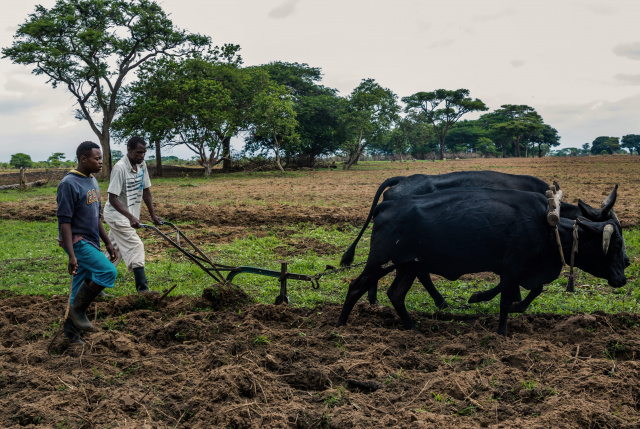 A resettled farmer opens a furrow in his field with an ox-drawn plough on Eden farm on November 27, 2017 in Beatrice, Zimbabwe. Standing outside the gates of the farmhouse from which he was evicted from in 2008, white Zimbabwean Deon Theron knows that he will never get his land back.But he does believe that Robert Mugabe's fall after almost 40 years in power could lead the new government to encourage white farmers to play a part in reviving the country's key agricultural sector. (Jekesai NJIKIZANA / AFP)

(AFP) - Zimbabwe on Wednesday signed a US$3.5 billion compensation agreement with white farmers whose land was seized over 20 years ago under the country’s controversial reforms.

The compensation is for built structures including farmhouses and irrigation systems on the farms which were redistributed to landless blacks.

But as the cash-strapped government does not have the funds to make the payouts, a committee made up of farmers and donors has been tasked with raising the money.

"In the agreement we have given ourselves 12 months to run around the world, around Zimbabwe to think of ways of raising this funding," Finance Minister Mthuli Ncube said at the signing ceremony in Harare.

“We are determined that we achieve that. It’s also about pledges not necessarily about cash being put on the table. It’s about commitment."

Mugabe justified the land grabs as a way to correct historical wrongs by claiming back land that was forcibly taken from the nation's blacks.

Critics blame Mugabe's land programme for wreaking havoc on the agriculture sector -- a mainstay of the economy.

Economic output fell by half following the land seizures, and the economy has been hobbled ever since.

Mugabe's successor Emmerson Mnangagwa said the Wednesday deal was "historic in many respects".

"It brings closure and a new beginning in the history of the land discourse in Zimbabwe," Mnangagwa said.

"The process which has brought us to this event is equally historic as it is a reaffirmation of the irreversibility of land as well as a symbol of our commitment to constitutionalism, the respect of the rule of law and property rights," he said.