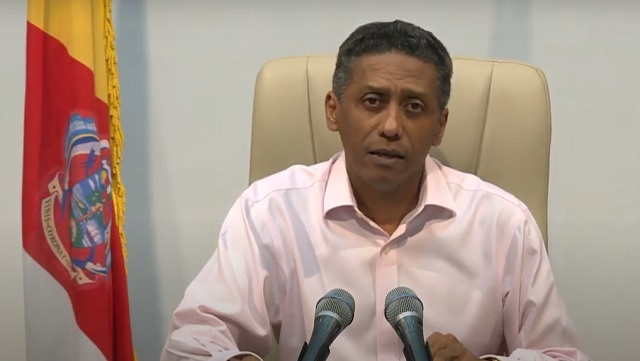 In a public address on Thursday, Faure gave an overview of what Seychelles has done and all the various measures taken in the fight against COVID-19. (SBC YouTube)

(Seychelles News Agency) - The presidential and legislative elections will be held at the same time this year to cut costs associated with holding two separate votes amidst the economic challenges that Seychelles faces, said President Danny Faure.

In a public address on Thursday, Faure gave an overview of what Seychelles has done and all the various measures taken in the fight against COVID-19 and how these have severely impacted the island nation's economy.

He said the government has budgeted SCR15 million ($845,000) for the presidential election scheduled provisionally for October while the election of the National Assembly, the country's legislative body, had been due next year.

"With the economic problem that we are in and to cut the cost of holding another election, I have decided that it is in the best financial interest of Seychelles to hold the two elections together," said the President.

He said that having the two together "will allow all of us to dedicate the year 2021 purely to work on the economic challenge in front of us."

The head of state of Seychelles, an archipelago in the western Indian Ocean, said that while an election is necessary for a democracy, it can at the same time take a lot of energy and resources.

"It is especially important in a period of uncertainty and difficult like we are in that the people, therefore, choose a person who will be better able to lead the country as the President and his National Assembly that has an important role," said Faure.

The last presidential election in Seychelles was held at the end of 2015 when the incumbent President at the time James Michel won a third and final mandate. The National Assembly election was held in September 2016 and the opposition coalition, Linyon Demokratik Seselwa (LDS), won majority votes in 15 of the 25 constituencies contested.

Faure added that he met with the Speaker of the National Assembly Nicholas Preira and updated him on the urgency of Seychelles' economic situation which necessitates holding the two elections at the same time.

Article 110 of the Seychelles' Constitution allows the President to dissolve the National Assembly for such reasons as the national interest.

"Now that we are coming to the end of this journey I have taken the opportunity to thank the 6th National Assembly, the two Speakers and the Leader of the Opposition and the Leader of Government Business and all the members of the two parties," said Faure.

He concluded in asking all Seychellois "to unite and work together and this is our one chance to succeed together.”

General » Be a reporter: Write and send your article » Subscribe for news alert
Tags: COVID-19, presidential and legislative elections