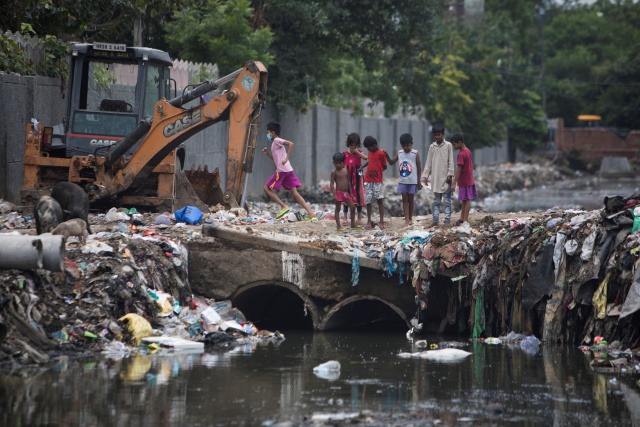 Children look at a sewage canal in a residential neighbourhood in New Delhi on July 30, 2020. (Xavier GALIANA / AFP)

(AFP) - Up to 800 million children around the world are being poisoned by lead from water and air pollution, the United Nations warned Thursday in a special report on the "massive and previously unknown" health crisis.

One out of every three children is estimated to have levels of lead -- a potent neurotoxin -- in their blood that require immediate action to prevent long-lasting damage, the UN's children's fund said.

"Knowing how widespread lead pollution is -– and understanding the destruction it causes to individual lives and communities –- must inspire urgent action to protect children once and for all."

Childhood lead exposure has been linked to a range of behavioural problems, as well as kidney damage and cardiovascular conditions later in life.

The problem, which occurs overwhelmingly in South Asia, is estimated to cost low- and middle-income countries almost $1 trillion over the children's lifetimes.

Lead pollution comes from a variety of sources, including open-air furnaces, paint and petrol.

Lead piping in many countries also produces dangerous levels of the chemical in drinking water supplies.

The UN report said a leading source of the toxin was un-recycled or poorly disposed-of car batteries. In countries where child lead poisoning is most prevalent, the number of vehicles on the road has doubled since 2000.

The analysis of childhood lead exposure was complied by the Institute of Health Metrics Evaluation, a leading global health research group partly funded by the Bill and Melinda Gates Foundation.

It found that while blood lead levels among children in richer countries had declined over the years, in poorer nations the problem had increased drastically.

"The good news is that lead can be recycled safely without exposing workers, their children, and surrounding neighbourhoods," said Richard Fuller, president of Pure Earth, a charity that co-lead the study.

"People can be educated about the dangers of lead and empowered to protect themselves and their children."

He said the economic and social returns on investing in reducing lead pollution could be "enormous".