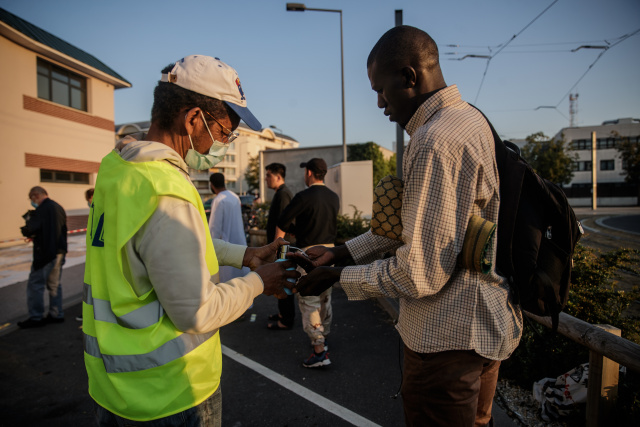 A Muslim worshipper disinfects his hands prior to enter Maryam Mosque to celebrate Eid Al-Adha in the city of Caen northwestern France on July 31, 2020. Eid Al-Adha is celebrated each year by Muslims sacrificing various animals according to religious traditions, including cows, camels, goats and sheep. The festival marks the end of the Hajj pilgrimage to Mecca and commemorates Prophet Abraham's readiness to sacrifice his son to show obedience to God. Mosques started to reopen as France eases lockdown measures after the spreading of the COVID-19 (novel coronavirus) while respecting barrier gestures. (Sameer Al-DOUMY / AFP)

(AFP) - Six months after sounding its top alarm over the new coronavirus outbreak, the WHO's emergency committee meets for a fourth time Friday to assess the raging pandemic.

The World Health Organization grouping, comprising around 20 members and advisers, can propose new recommendations or amend existing ones.

However, there is little doubt that the WHO will maintain the pandemic's status as a public health emergency of international concern (PHEIC) -- its highest level of alarm.

At least 17 million people have caught the virus, more than 660,000 have died, and infections are still rampant.

WHO chief Tedros Adhanom Ghebreyesus has stressed that the UN health agency had declared a top-level public health emergency on January 30, when there were fewer than 100 cases and no deaths outside China, where the virus first emerged.

The WHO has been sharply criticised for the length of time it took to declare a PHEIC.

The agency has also been criticised for recommendations deemed late or contradictory, in particular on wearing masks, or the modes of transmission of the virus.

The WHO's COVID-19 technical lead Maria Van Kerkhove said Thursday that the organisation had reacted immediately to the first signs of the pandemic, mobilising its forces to act and inform.

Alongside her, the WHO's emergencies director Michael Ryan said he had been surprised by how slowly some countries reacted.

"We did focus in the early days of this crisis on really driving our technical and operational assistance to countries that we would traditionally feel that need that assistance," he said.

"If I could go back and change anything, I think we would have also been better served to be offering that operational and technical assistance to countries where I think we made some assumptions about capacities that existed," he said.