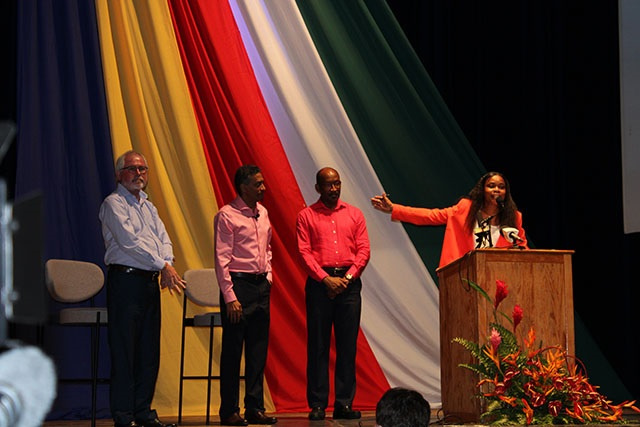 Loustau-Lalanne (first left) was presented to the over 200 members of the congress, the party's supreme organ, by the incumbent President Danny Faure. (Rassin Vannier, Seychelles News Agency)

Loustau-Lalanne was presented to the over 200 members of the congress, the party's supreme organ, by the incumbent President Danny Faure, and his nomination was approved unanimously through acclamation.

In his keynote address, Faure reiterated his recent calls for a government of national unity to help Seychelles navigate the difficult years ahead brought about by the COVID-19 pandemic.

He said it was a government of national unity that will give Seychelles a chance to recover from the crisis, safeguards the country's progress and ensure stability.

Faure said it was with this in mind that he chose Loustau-Lalanne as his running mate because of his experience in various fields, loyalty and the fact that he can face any challenge.

"I am convinced that he is the person I need alongside me to govern a national unity government for the betterment of Seychelles", said Faure.

Loustau-Lalanne, 65, who is presently the Minister of Finance, Trade, Investment and Economic Planning in Faure's Cabinet of Ministers, was nominated in mid-July.

In his address following congress' approval, Loustau-Lalanne said Seychelles was going through an unprecedented time, which required an extraordinary effort. He said his presence was also extraordinary as it was the first time in his over 45-year career that he stood before a political gathering. Although he has worked with politicians he said he has never been a member of any political party.

"There is a saying that says if you use the same formula for the same problem, you will always get the same result. In this extraordinary moment, President Faure in his wisdom has decided to change the formula. I believe this gives me a unique opportunity to make my contribution in a government that is inclusive," he added.

He also has long experience in the tourism sector where he was the principal secretary and then became the chairman and chief executive of the first tourism board.

Provisional dates for the presidential elections in Seychelles, an archipelago in the western Indian Ocean, have been set for October 22-24 by the Electoral Commission.

Last Thursday, Faure announced that both the presidential and legislative elections will be done simultaneously to cut costs as the country faces an economic crisis brought about by COVID-19.