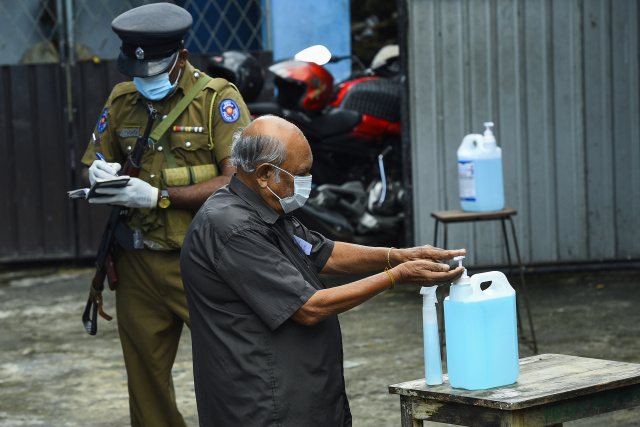 A voter uses hand sanitiser before entering a polling booth to cast his ballot in the parliamentary election in Colombo August 5, 2020. Sri Lankan voters cast their ballots on August 5 for a new parliament as the ruling Rajapaksa brothers seek a fresh mandate to cement their grip on power. (Ishara S. KODIKARA / AFP)

(AFP) - Sri Lankan voters cast their ballots Wednesday for a new parliament as the ruling Rajapaksa brothers seek a fresh mandate to cement their grip on power.

The election had been postponed twice due to the coronavirus epidemic, but voting finally got under way at 7:00 am (0130 GMT) with strict hygiene measures in place to prevent the spread of the disease.

People began lining up outside polling stations even before they opened across the island where 16.23 million out of the 21 million population are eligible to vote.

Voters must wear face masks, keep a social distance and bring their own pen or pencil to mark their ballot paper under rules to prevent transmission of the virus.

The measures have made it the most expensive vote on record at 10 billion rupees ($54 million), the Election Commission said.

The Rajapaksa siblings are seeking a two-thirds majority to roll back constitutional changes introduced by the previous administration that limit the president's powers.

Analysts expect them to easily secure a majority in the 225-seat parliament. First results are expected by Thursday evening, with the final tally due late Friday.

Gotabaya, 71, appointed his older brother Mahinda, 74, a former president, as prime minister in a minority government after he won the presidency in November.

Since then Sri Lankans have largely embraced their populist platform, which emerged from a wave of nationalism in the wake of the deadly 2019 Easter bombings by Muslim radicals that killed 279 people.

The brothers are also viewed as heroes by the Sinhalese majority for orchestrating the military's ruthless campaign that ended the decades-long Tamil separatist war in 2009 during Mahinda's presidency.

Among the first to vote was Election Commission chairman Mahinda Deshapriya who cast his ballot at Colombo's Lindsay Girls' school.

"This is the first time since 2011 that I went to a polling booth as a voter," said Deshapriya, 65, who has not participated in elections as head of the commission.

"I wanted to demonstrate that it is safe to go out and vote."

There were fears that the threat of the epidemic would reduce turnout compared to the 82 percent participation in the November poll.

Even with a super-majority, the incoming administration faces challenges.

The economy had scarcely recovered from the blow of the 2019 bombings before the coronavirus epidemic struck, prompting lockdowns that have still not been fully lifted.

Still, Sri Lanka appears to have escaped the worst of the contagion.

Test result figures are considered dubious by opposition parties, but authorities have reported just 11 deaths from fewer than 3,000 cases.

"They will win by a huge margin but the economic and social problems post-COVID-19 will be huge," political analyst Kusal Perera told AFP.

The Asian Development Bank expects the island's economy to shrink by an unprecedented 6.1 percent this year.

Mahinda is expected to lean heavily on China for economic assistance -- as he did during a decade as president until 2015 -- but also increasingly on neighbouring India.

General » Be a reporter: Write and send your article » Subscribe for news alert
Tags: SriLanka, election